What kind of work is a game music composer who creates BGM that is indispensable for games? 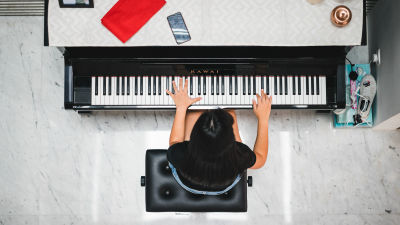 When you listen to the sound of a game that has had a memorable impact, even when months or years have passed since you finished playing the game, not only the content of the game but also the emotions and impressions of playing it. It may come back to life at once. An event 'NoisyCroak Presents Game Music Composer Talk ' where composers who make game sounds that are indispensable for talking about such games gather and talk about episodes unique to game music composers that are not usually talked about. 'Show ' was held in Machi ★ Asobi vol.21.

From the left, the event was moderated by Noisycroak's management department promotion manager, Yuki Jinuchi, and Noisycroak's representative director, providing songs for the game 'Bungo to Alchemist ' and the TV animation ' Killing Angel'. Hideki Sakamoto , Hiroyoshi Kato, whose representative works include songs from 'Disappearing City ' and ' DanceDanceRevolution ', and Ichiro Kuwahara, who is known as a composer of 'Monster Strike ' and ' Monster Farm 5 Circus Caravan ' as a special guest. Since the same BGM will be played over and over again in the game, some people will stop listening to the sound in the middle. In particular, smartphone games are sometimes played in the city or in the presence of many people around, so it seems that many people play in silent mode. Therefore, it seems that it is NG to make a game sound that basically says 'You can not clear the game unless you listen to the sound', but even so, more people are interested in the game sound. It seems that this event was planned because I wanted them to do it. 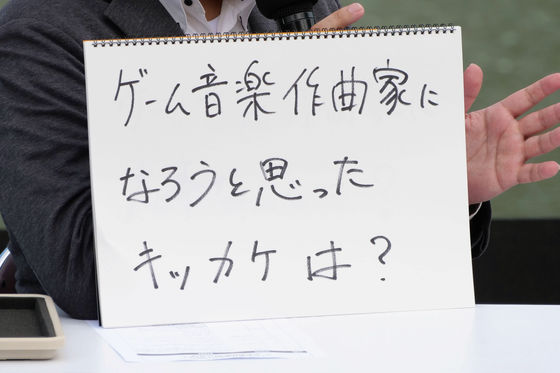 Mr. Sakamoto cites 'Dragon Quest' as a key to becoming a game music composer. Mr. Sakamoto originally learned the piano from the age of four, but at that time it was a rare case for a boy to play the piano. Still, it seems that he was in charge of accompaniment at school chorus contests. Meanwhile, the appearance of NES & Dragon Quest was a big hit for Mr. Sakamoto. He said that he had a good reputation for music, and when he actually played it, he thought, 'I want to make this kind of sound!', And from there he started aiming to become a game music composer. Mr. Kuwahara cites 'Novel Movie DQ5' as a key to becoming a game music composer. Mr. Kuwahara, who was thinking of becoming a novelist until he was in college

, seems to have cleared Dragon Quest V, which was just released at that time, by playing Oshin without saving for 3 days while sleeping. He revealed his memory of having been worried about which character to marry for about 6 hours on the night of the second day, and then became addicted to game music and began to think, 'If you want to play music, you want to play game music.' So, Mr. Kuwahara started making game music while he was in graduate school. However, it seems that he was able to play the violin from the beginning, and he had a solid knowledge of music. Mr. Kato has loved games since he was in elementary school, and he was a game freak who went to arcades six times a week and recorded sounds by hitting a walkman on the game case. However, when he became a high school student, he became more absorbed in music than in games, revealing that there was a time when he was away from games. After graduating from college, he made music as a freelancer, but he wanted to broaden his range of music and decided to try game music. So when I googled for 'game music', the HP of NoisyCroak came out and I heard that I am now. ◆ What is the first material you get before composing game music?
It seems that the first material you get when creating game music is the visuals related to settings. For example, in the case of RPG, it seems that detailed judgment is made such as deciding whether to make it look magnificent by looking at the landscape of the castle, and deciding how much vibrato to apply from how high the building is. .. 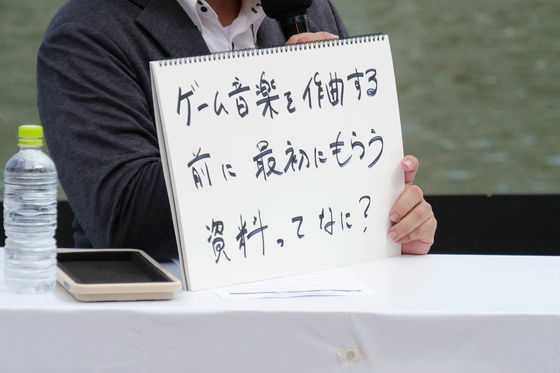 It seems that the ideal composer is when the visuals and plots are aligned, but not only in such cases, there are also cases where 'Please give me 20 songs for battle' with no settings. that's right. In that case, it seems that there are cases where the composer has to hear from the composer, such as 'What size is the enemy and what kind of weapon do you use?' Because you do not know what kind of battle scene the song will play in.

Mr. Kuwahara, who is in charge of the BGM of Monster Strike, is thinking about songs every time a new stage is added, and during this time he was asked to write a song with the title 'Japanese-style hell'. Therefore, Mr. Kuwahara revealed that he solidified the image of the song with the image of 'Noh', which is a traditional Japanese performing art. In the case of Monster Strike, there is no story, so it seems that the image will be expanded by referring to the motifs of the characters that appear, and as soon as the stage creation work progresses, he will request 'Please give me a visual!'.

When Mr. Kato was in charge of BGM for Shōmetsu Toshi, he received a picture of a salaryman exchanging business cards as reference material for creating a battle song. It seems that this is completely correct when you think about it after the game is completed, but Mr. Kato at that time said that it was 'What is this?' However, since it was written as an annotation 'a song with an electro and sprinting feeling', it is revealed that the visual was passed through and the song was created. As you can tell, in-game visuals are a very important element for game music, but in some cases it was decided to create visuals according to the song that was made, so in that case it is really exhausted to the composer. ..

◆ What do you think is the strength of your style?
In the case of 'Bungo to Alchemist' composed by Mr. Sakamoto,

an offer came from Mr. Jiro Ishii, who supervises the world view and is in charge of the scenario, and since he had worked with him originally, he said 'Do whatever you want'. It seems that it was broken. Mr. Sakamoto's composition style seems to be to inflate the image in his head while moving, sit in front of the keyboard and create it at once, and in the case of 'Bungo to Alchemist', only a few dozen songs provided at the beginning It is revealed that it was created in 2 days. Mr. Sakamoto basically says, 'I think it's useless if you think about it,' and he seems to value phrases that appear unconsciously. 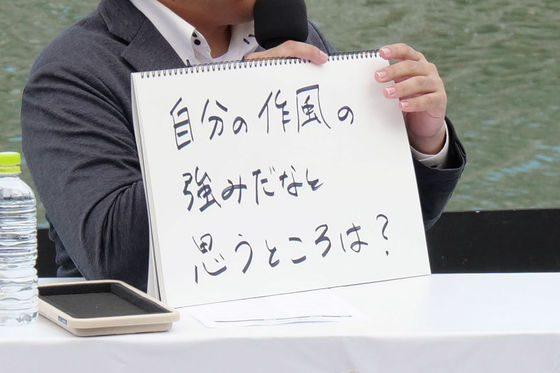 Mr. Sakamoto himself analyzes his strengths, saying, 'I think I am a melody maker.' Basically, game music must be made so that it can be repeated, but if the tempo is changed or modulated too much, it may not be possible to return to the beginning of the song, so it seems that there are cases where it is difficult. However, he doesn't have much trouble creating a melody, and he thinks that changing and modulating the tempo is his style. On the other hand, Mr. Kato pointed out that it is difficult to play Mr. Sakamoto's songs at live performances. In fact, Mr. Sakamoto's songs took much longer to practice and learn than ordinary songs.

The soundtrack to the song 'Bungo to Alchemist' composed by Mr. Sakamoto has been released, and you can listen to all the songs in the following movie.


Mr. Kato originally liked dance music, so he said that he created something that cherished the sound pressure that was provided to Dance Dance Revolution. Also, the producer of Shōmetsu Toshi told me that he is good at making short sounds (refrain) of 1 bar and 2 bars. Mr. Kato composed about 60 songs for Shōmetsu Toshi. You can listen to it in the following movie.


In addition, games for smartphones tend to have a lot of sound data, so he seems to be careful about the timing of downloading the data. In addition, there are cases where it is difficult to hear the bass when it is played through the speaker of the terminal, or the bass becomes noise, so it seems that that part has been cut in advance. So, when you listen to the soundtrack, you may get a different impression of the same song.

Mr. Kuwahara composes mainly by driving, and he seems to make a total of about 30 songs for Monster Strike. The length of the song is basically free. Mr. Kuwahara is a strange person who composes while riding a bicycle, not in front of the piano. He rides a bicycle with a staff paper, and when he comes up with a good phrase, he writes it down and composes it. It seems that there are cases where the composition is remembered a few days later and cases where it is not remembered at all. It seems that there are many cases where the song is made as it is, thinking 'I'm thinking about it.' Mr. Kuwahara revealed that there are many cases where it is said that the songs he created are 'once you listen to them, you can't get out of your ears', not because 'you also make the songs that you can't get out of your ears as they are'. I was analyzing it.


◆ What is important for game music composers?
The final theme is about what each person cares about when making music. 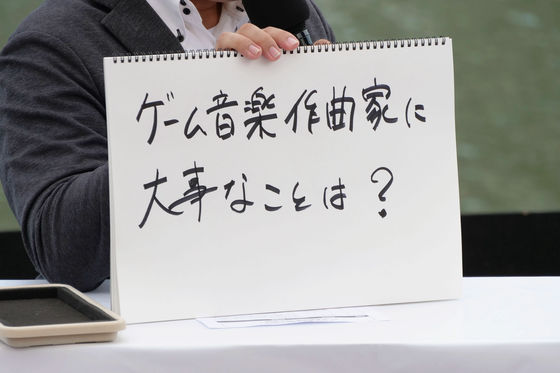 Mr. Kuwahara thinks that game music is like being close to the feelings of the player, and they (composers) sympathize with what the game is like, and what kind of feelings the user feels when playing. He said that it is important to create an image of what will happen.

On the other hand, Mr. Sakamoto says that although it is important to be close to the game, it is also important not to be close to it. This means that he dares to ask himself to compose, so he thinks that he should cherish the parts such as his own personality and originality. In the talk show, Mr. Sakamoto boasted, 'I've definitely seen all of my songs,' I tried playing ',' and talked about the joy of playing the songs I made. Mr. Kuwahara also agreed. Also, it seems that there are cases where such a 'played system' is played by a person who is completely better than himself, or even though the performance is wrong, that one is a cooler arrangement.

At the end, he mentioned that there weren't many events about game music at Machi Asobi so far, and he revealed that he would like to do live performances in the future. And I hope that people who haven't listened to the music of smartphone games will be able to listen to it, or it will be an opportunity to raise the volume.

In addition, at 'Daikichi Curry', a store targeted for Machi Asobi's gourmet hunt, you can get a postcard with the faces of Mr. Sakamoto and Mr. Kato who participated in the event, so if you are interested, please buy curry. Please eat and get it.

It is 'Daikichi Curry' in Poppo-gai, Tokushima.
I'm a gourmet hunt.
What a postcard!
Mr. Sakamoto's 'face' is creepy ...
Not popular at all.
What to do now····
As a usage method, amulets, apotropaic magic, instead of straw dolls,
We are proposing to users considering what the darts are like. pic.twitter.com/BZQ7kqApWa