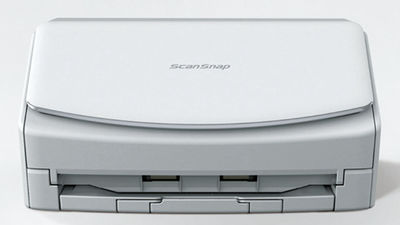 It was announced that the new product " iX 1500" of the personal document scanner "SnanSnap" will be on sale from October 12, 2018. It will be the first successor in six years from the flagship model "iX 500" of the "ScanSnap" series.

As a major change, the scanning software was redesigned to "SnapSnap Home", the file name was proposed automatically from the scanned contents, the time for input was saved, and the "learning function" Organization will be done as desired.

Basic functions are also improved, high-speed reading of 30 sheets (300 dpi) per minute on both sides of A4 color, folding document scanning by manual feed scan, correspondence to Wi-Fi 5 GHz band, etc. are done.

The price is 50,840 yen including tax at PFU Direct of the official online store.

A nine-week investigation approaching the lost Continent "Geelandia" finished, to clarify the secret of the mysterious continent - GIGAZINE

I have heard the story behind the development of "Booking.com" that conducts 1000 A / B tests a day [Part 1] - GIGAZINE

I have heard about the story behind the development of "Booking.com" that conducts 1000 A / B tests a day 【The second part】 - GIGAZINE

Discovered that some 10,000 routers were hacked by someone to raise security - GIGAZINE


Cat catching in the room


Because Mizuho Bank is anticipating that ATM will be suspended from Friday at 3 odd holidays this weekend, we are posting images again for that.
At last, there are four consecutive battles against the personal account data opponent of 100 store class, and a tough game called Mizuho version "Death Road" continues. # No More Mizuho Refugee # If you forget to lower it 3 consecutive holidays in hell pic.twitter.com/21iG5uFJ5t


◆ Science (science · academic · technology)
ZOZOTOWN · Mr. Masawazawa's moon orbits The reason why space travel that does not enter the orbit can not be called "Moon Travel" "It's like going home without getting off at Atami IC at high speed"

Typhoon No. 24, Reason for not being "Typhoon No. 21 Returning" concerned in Osaka Bay (Atsushi Katahira) - Individual - Yahoo! News

Nobel Prize: Honorable blessing at Kyoto University Tatekan ... But the university side was removed - The Mainichi Newspaper

【2018/10 / 2-09: 55 TBC weather storm】 "Announced at 9 am on the 2nd." Typhoon 25 in the east of the Philippines has developed to a "furious" force at 3 am today. Although the center of the forecast circle follows the route slightly west from No. 24, please be aware of future information as weather may affect the weather of Miyagi on 3 consecutive holidays. pic.twitter.com/SgWeuFhb9s

Macedonia, a referendum on changing the country name has not been reached (Photo = Reuters): Nihon Keizai Shimbun

I and "Shincho 45" Anti-Sociology course blog


What has evidence and logic is called "speech". Because there is evidence and logic, "argument" can be done. Emotional theory, prejudice, bad mouth of individuals with no basis and logic are not subject to discussion. That is precisely where you argued against prejudice without any productivity, and there is nothing you can get here, it will be useless.
I put a close-up on "Shinchose 45" ahead of time when I put down a low-level Mr. Sugita's saddle that should be a part of it.


It will take up to 4 days to recover following more than 160,000 power outages Shizuoka | NHK News

Hokkaido: brown bear, trauma witnessed by a trap beside a private house? Individuals who have witnessed success - Mainichi Newspapers

Legoland entrance fee, adults can save up to 90% Target customers in winter: Asahi Shimbun Digital

CNN.co.jp: Postponement of the Nobel Prize for Literature Awards, Sexual Impersonation by Baptism Ritual Sin with a Buddha Photographer 2 Years


Humans have bugs built in beforehand. It is called "cognitive distortion". Perhaps it should be the scenery that I saw somewhere. First of all, it is to abandon the illusion that I am not distorted. Everyone distorts. But, people who can recognize it can have leadership in the era of uncertainty. pic.twitter.com/lS0oxoNgPX


The vending machine of the Honda Cars service shop trash bin is beautiful as expected. https://t.co.Q 4 VH 1 b YMlG

Spiders have fallen on the screen so I made the spider draw and let it fight pic.twitter.com/sdOTsCiOTM

Mercari's new graduation 90% is the impact of foreign nationality. The Japanese have become an era when even companies from their own country are no longer needed ...: IT bulletin

Those who do not adopt junior are not worth senior - portal shit!

Netflix: Programs that viewers can choose the endings, distribution within the year - stakeholders - Bloomberg


I probably wrote responsibility for the first table talk in Japan and Computer RPG special issue in Japan in the November 1983 login magazine, and watched Japanese CRPG from then, so I can understand this person's writing well.


To summarize easily with "working cell", it is a major advance in the medical community that cancer cells that are dressed as Ishida Akira can not pretend to be normal cells by the Nobel Prize-winning anti-psychotropic medicine in the animation industry Meaning that development of shock impact is pic.twitter.com/BN7MacCS4N


You do not have a level like drinking Widder pic.twitter.com/beXCvaS7kr


My girlfriend is a futon system girl. pic.twitter.com/kbTCYo0Deq


I thought that it looks like Sawamura who has suffered from suddenly going out of the shoe dryer's image https://t.co/3xDmuRmT6v pic.twitter.com/1XvbEByvAR


It makes me smile when I show it to the same generation pic.twitter.com/3EGCsiQGl 4


I was laughing too much and got muscle pain.
Tomato head # Fort Knight pic.twitter.com/5ermcPvWIV


Our adventure has just begun! !

When you play the game, you will want to get involved by ending. pic.twitter.com/3epCQ1dZHj


It's not such a dimension as tired of pic.twitter.com/rO4ewpeAsZ


You know in 3 minutes! Today 's rice of Sanemiya - tenth episode It is delicious even if it is cold - YouTube


I retired from from software. What I learned as a game planner «OpenGameSeeker

What? J PRIDE: [Good news] "Until one ball detachment" of Hanshin · Umedo, it was not judgment of Umeno

I told you before, Hanshin coach incompetence