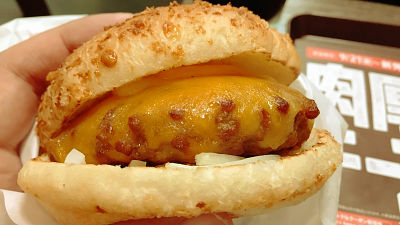 " Heavy cheese hamburger " that places plenty of two types of cheese in a hamburger patty with a thickness of 2.5 cm and a weight of 90 grams, and squeezes it with cheese flavored buns along with onion demisauce and slice onion, on September 21, 2018 Appeared as a limited-time menu for Lotteria. I obviously tried to taste a dish that only seems to be "good". In the shop front "brand new sale", a banner of "thick cheese hamburger" was issued. The panel on the checkout also has thick cheese hamburgers. So that's why ordering. Thick cheese hamburger is a single item price 450 yen including tax, but this time the set of potato S and drink S uses a coupon of 60 yen discount including 690 yen including tax, plus a drink changed to coffee with plus 30 yen plus I tried ordering. It is 30 yen more than ordered at regular price. 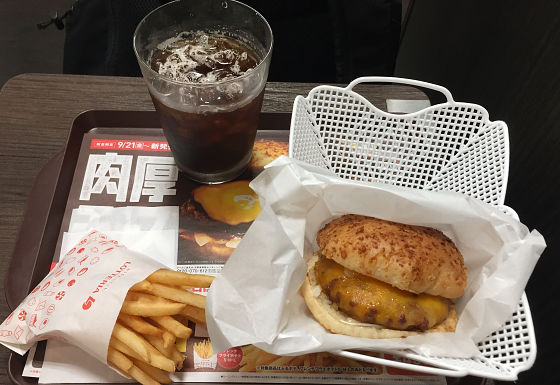 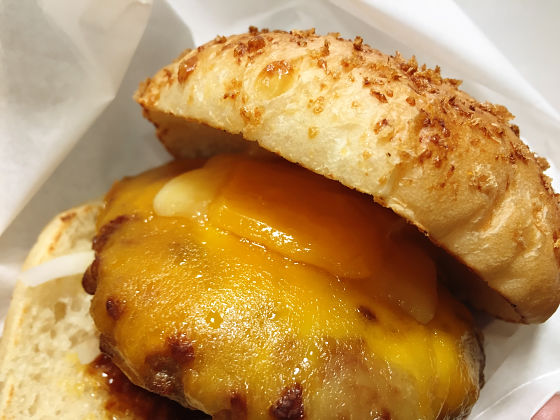 Under the patties there was a sliced ​​onion, "onion demi sauce" which was sauteed onion and demiglace sauce was sandwiched. In addition, the buns became cheese buns to which Parmesan cheese was added, and it was a dish of omnidirectional cheese from anywhere. The size is about this compared to transportation IC cards. Even so, the size of the proportion of hamburger patty to the total height of a hamburger is too worrisome. It is very voluminous when I try to eat a bite, and it is a rich taste that the head responds like "ah, fine" instinctively. The fragrance of cheese drifts faintly from the fluffy buns, and the meat juice and cheese coming out from the juicy hamburger patty change into "the umami" by fusion, making the mouth very happy . The juicyness of the hamburger patty was badly hurt than anything. In addition to the beef, the cut onion is included to increase the juicyness, the richness of beef and sweetness of onion, and juicy and onion juicy surges. It seems that the juicy ingredients merged with the cheese and it became a non-stop cheese hamburger. Like the CM of Kamen Rider Gumi "Phrase" juicy phrases flutter. "Thick cheese hamburger" is a limited-time menu from September 21, 2018 to late October. As it is offered at Lotteria throughout the country except some stores, people who are interested please try by the end of the period.