I tried playing a new card game 'DOS' following 'UNO' where the scream and addition of 'Dos!' Are the liver " DOS (Dos)" appeared in Japan for July 26, 2018, from Mattel which sells the world popular boasting card game "UNO (uno)" which has a history of nearly 40 years. "DOS" is a card game that is a sequel to "UNO" meaning "2" in Spanish and "1" in Spanish as well. Since I got the real thing of such "DOS", I actually played with four editorial staff.

Brothers of "UNO (Uno)" appeared! What? Finally arrived in Japan! As the name suggests, "2" is the theme of a new sensation strategy card game "DOS (Dos)" released in early August | mattel 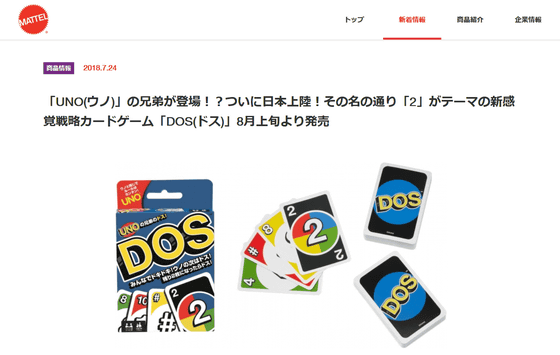 The package of "DOS" looks something like this. The letter "DOS" of foil presses an eye. 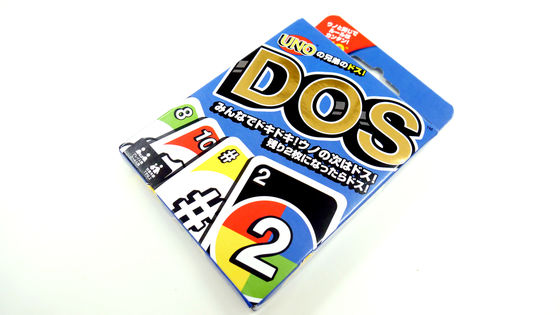 On the golden "DOS" it is appealed as "UNO brother Dos!", UNO series. The assumed play number of "DOS" is 2 to 4 people, the target age is 7 years old or more Inside is only the card and instruction manual with the rules written. There are 108 cards in all. There are four types of cards: green, blue, yellow and red, and wild cards familiar with UNO are also present besides that. 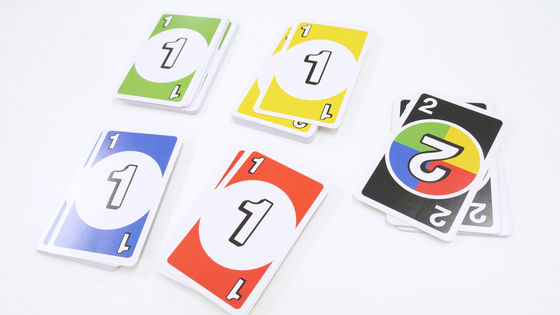 The color card consists of 1 and 3 to 10 numbers and # (sharp). # Is written is "wild card", it is a card which can designate the number freely. 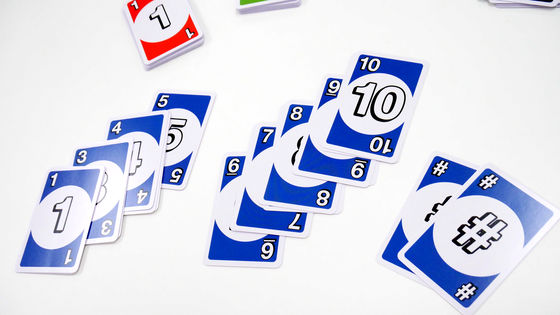 The second card is "Wild DOS card" which allows you to designate colors freely. 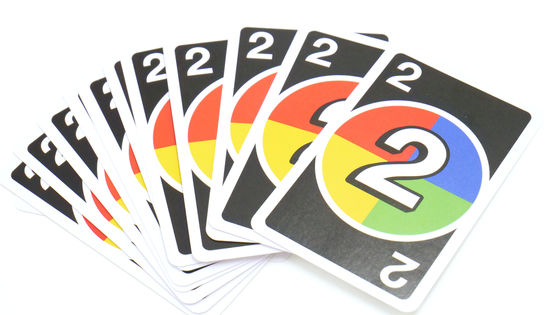 First, draw one card and decide who is the greatest number of players to be the one who pulled the largest number of cards. The parent number player shuffles the card and hands 7 cards to everyone. 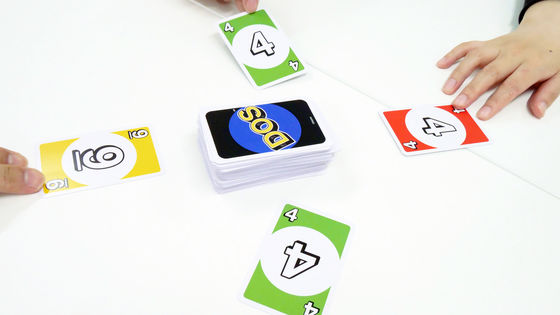 Place only two "center cards" that will serve as hands on the front of the battlefield and put the remaining cards on the deck. "UNO" has only one center card, but "DOS" will start with two center cards as its name suggests. 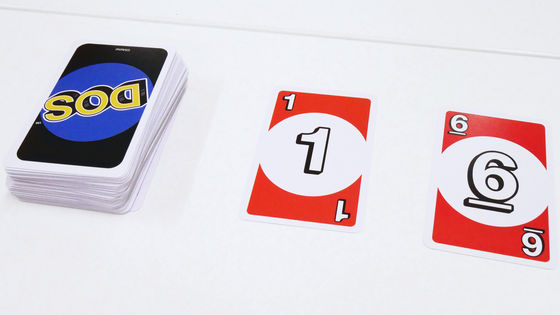 When you finish putting out the card, move the matched card and center card to another place as a discard card, install again from the mountain card so that the center card becomes 2 again, and finish the turn. 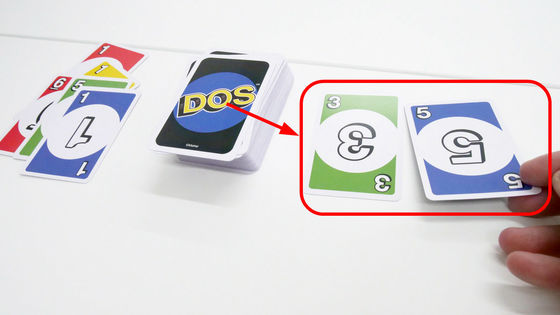 Like UNO, the player who has used up all the cards will win, but when the remaining 2 states come, it must be said "Dos!" Quickly. This rule is very similar to UNO. In the following scenes we shouted "Dos!" Vigorously, but at the next turn I could not put out a card that would absolutely match. 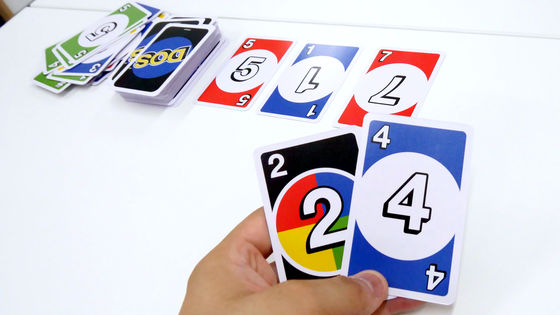 I decided to leave the wild DOS card which can specify colors freely because it is important. I declared "Dos!" Again and added "Green 4" to the center card. If you point out another player to forget to say "Dos!", You have to draw 2 extra cards from the deck. 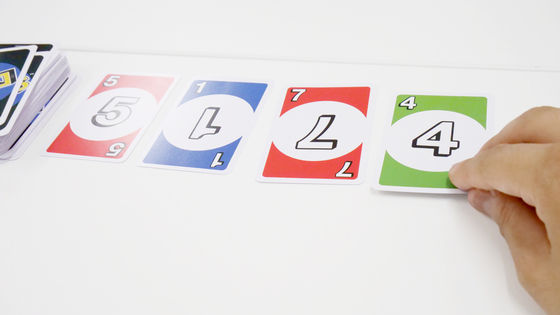 Matched green 5 went to a discard ticket, and a center card was refilled from a deck ... ... 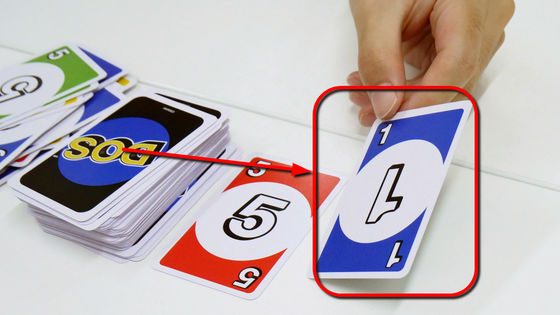 Add only one card from your hand to the center card. Color match is advantageous because the hand decreases quickly, so I want to positively aim. 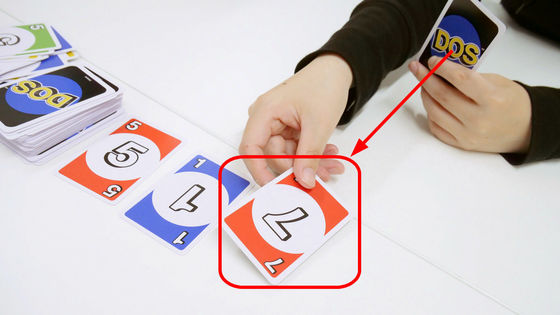 Furthermore, the following image shows a "double color match" that puts out two cards of the same color as the center card to play. 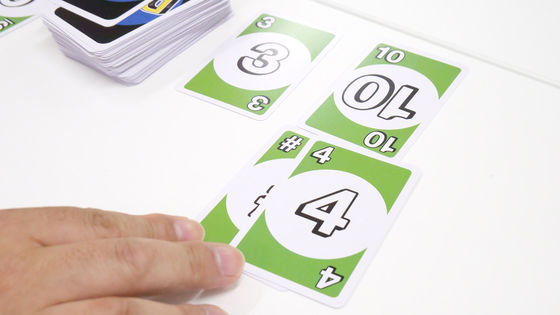 When a double color match comes out, other players have to draw one card at a time from the deck and add them to their hands. "DOS" has no familiar disturbing cards in UNO, such as "Draw 2" and "Draw 4", so "Double Draw 1" by double color match is the only way of disturbance in this game. Multiple cards can be matched with one turn. For example, in the following scenes, three editorial members of the hand have matched wild DOS cards and declared "Dos!". 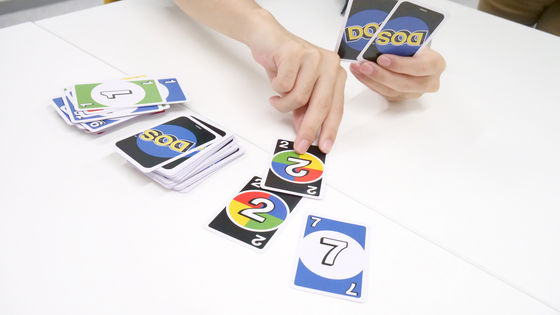 In addition, I put 2 hands on the other hand into another center card with a double color match and handed up a speedy and beautiful combo. 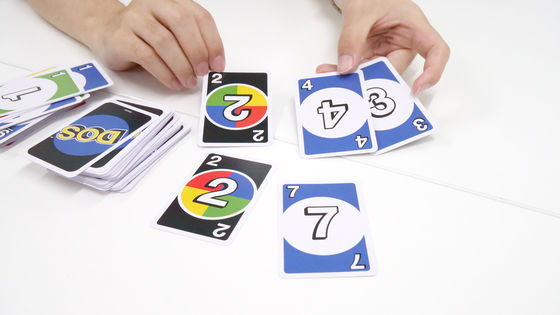 In the instruction manual, as in the official rule of "UNO" " When the game is finished the game is ended when one person gets up.The game is repeated while recording the total points of the remaining hands as minus, and finally the player with the highest total score Was victorious ". However, it is also ants that change this occasionally, such as "Continue game until remaining 1 person" around here. 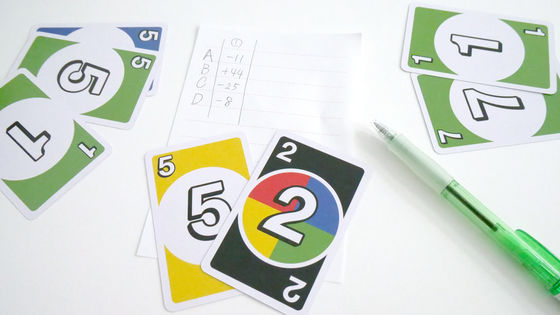 Actually playing "DOS", I learned a completely different feeling with the impression that it is a game to play while thinking calmly rather than a party game that is prosperous with a large number of people like "UNO". The rules of DOS are not that complicated, but UNO can understand numbers, colors and effects only by looking at cards, whereas in "DOS" unseen rule parts such as color matching and handling of center cards There was a scene that puzzled to increase. Thanks to that, I decided to play with the first 1 or 2 games trial and error, but once I get used to the rules I can play with cherry in about 10 to 15 minutes.

From the editorial staff who played, "I felt the part that puts out cards with addition is new, but thinking with funness as a matter of fact, the army is raised to" UNO "" "Scouting with the remaining 2 by" Dos! " There was an impression that it does not come nicely ". In particular, an editorial staff who plays a lot of card games and board games, "" DOS "does not have such a function as to disturb the opponent like" UNO ", basically it is necessary to mental arithmetically by looking at the hand at his turn Because there is, I feel lonely that communication with other people is hard to occur. "

"DOS" is 891 yen including tax, it can also be purchased from Amazon.co.jp. 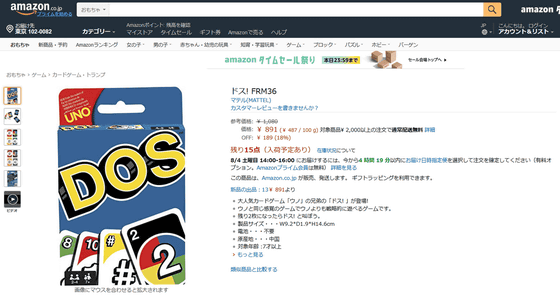