'Uno All Wild' play review that fights with the ridiculous rule of removing colors and numbers and only wild cards, anyway, momentum is important, so explosive progress is recommended 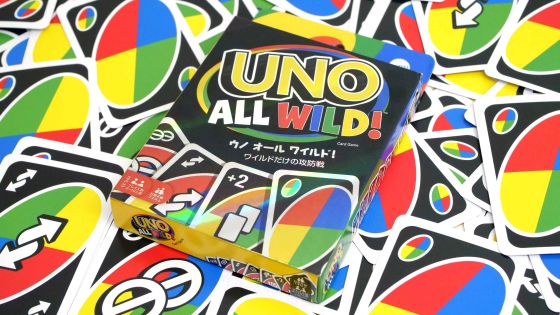 In April 2022, ' Uno All Wild ', which changed all the cards of the standard card game 'Uno' into wild cards without colors or numbers, appeared. I actually played and confirmed what kind of game it would be if I removed the concept of color & number from Uno of the rule of 'issue cards of the same number and color'.

All cards are wildcards! ?? A new sensation that has nothing to do with numbers or colors! 'Uno All Wild' to enjoy speedy and thrilling game development will be released from mid-April | mattel The number of players is expected to be 2 to 10, and the target age is 7 years old and over. 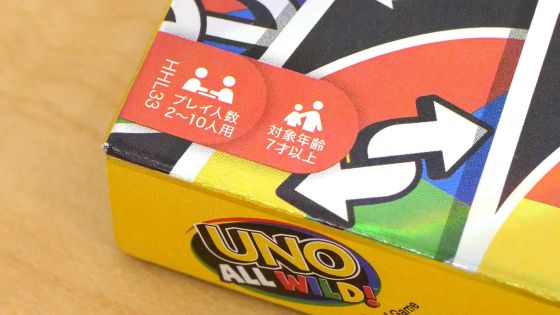 There was a card and instructions in the package. 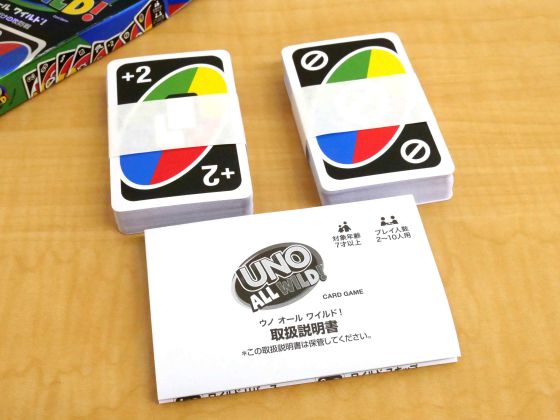 Normal Uno contains cards with red, blue, yellow, and green numbers, but 'Uno All Wild' has only wild cards that can be put into play regardless of color. There are 112 cards in total, of which 54 are wildcards that do not have the usual special effects. 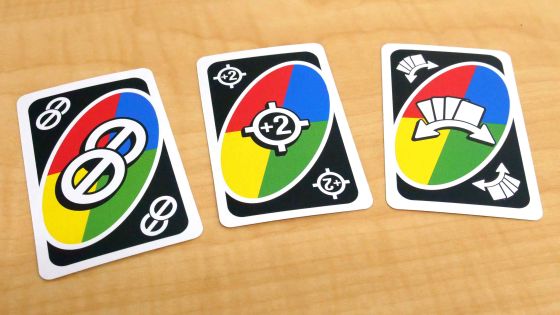 ◆ I tried playing 'Uno All Wild'
This time, I will play 'Uno All Wild' with 6 people. First, deal 7 cards to each of the 6 players. 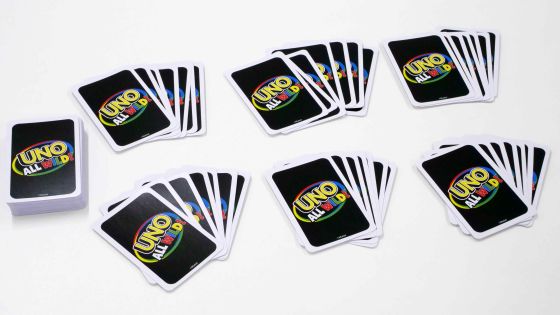 Next, put the top card of the deck into play. 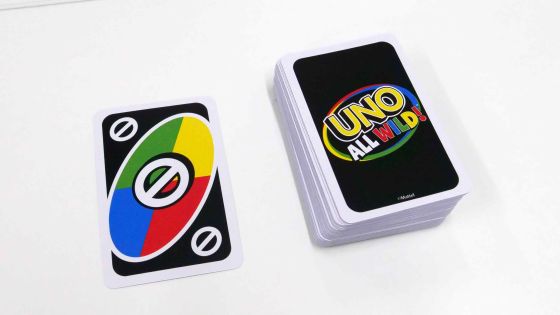 This hand looks like this. In normal Uno, it is necessary to devise a strategy according to the color and number of the card that first came into play, but in 'Uno All Wild' it is possible to put out any card that comes into play. 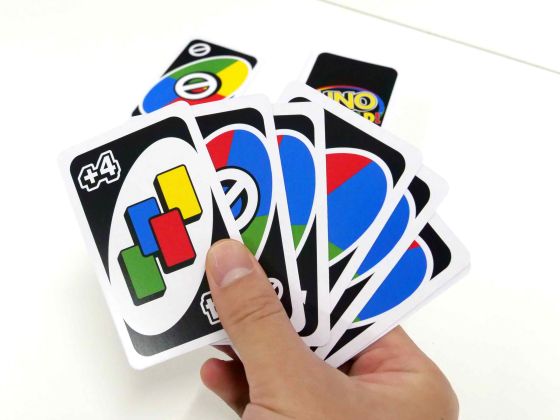 First of all, I put out Wild Draw 4. In normal Uno, it is a 'super powerful card that allows you to specify the color while letting the opponent draw a card', but in 'Uno All Wild', you only have the opponent draw 4 cards. 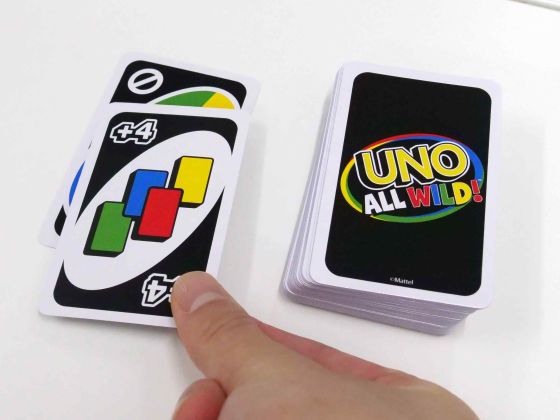 The next player on the turn reluctantly draws four cards. Depending on the table, the rule 'By stacking Wild Draw 4 on Wild Draw 4 to avoid drawing 4 cards and letting the next player draw 8 cards' may be used, but that is a local rule and is usually used. According to the official rules of Uno and 'Uno All Wild', if you get a draw 4, you have to draw a card quietly. 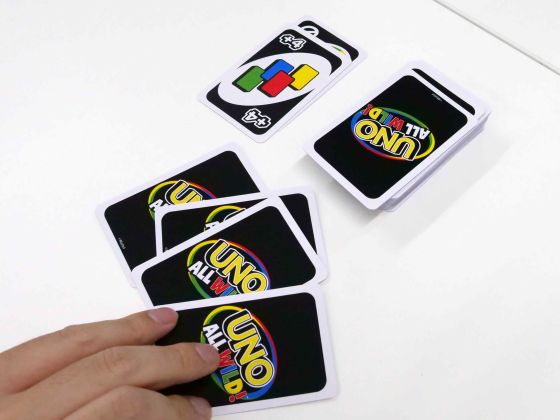 In normal Uno, there are only two types of cards that can be drawn, 'Draw 2' and 'Wild Draw 4', but 'Uno All Wild' also has 'Wild Nominated Draw 2' that allows the nominated player to draw two cards. To do. For this reason, you may be forced to draw cards many times during one play. 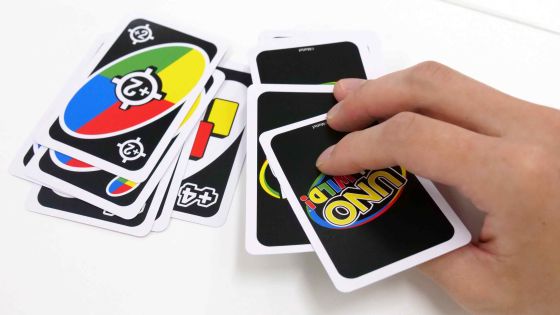 The hand after drawing the cards looks like this. It is covered with wild. 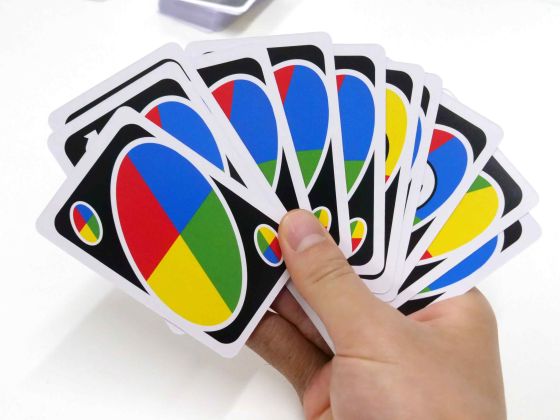 Even in 'Uno All Wild,' Uno's characteristic rule of 'calling' Uno 'when there is only one card left in his hand' is still alive. In 'Uno All Wild', there are basically no scenes where you can't put out cards and there are few scenes that require thinking, so it's easy to lose your concentration, but if you're out of concentration, forget to shout 'Uno!' You will end up drawing two cards. 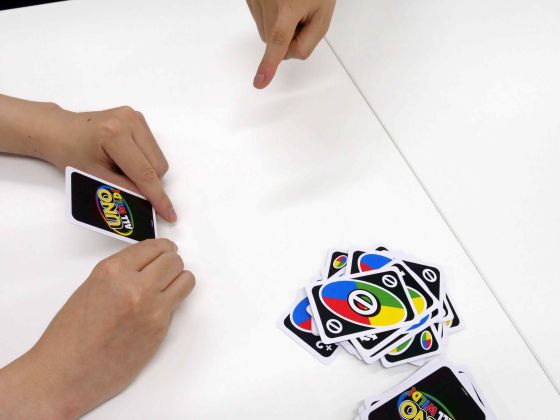 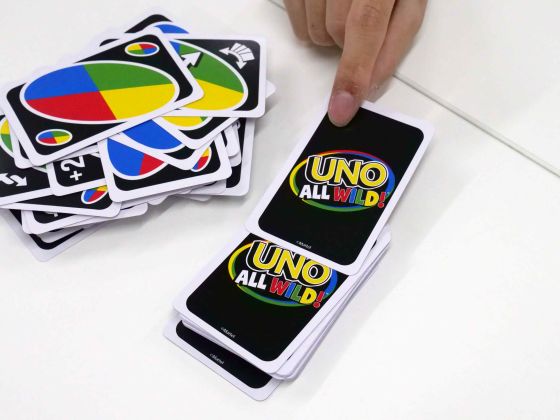 The player who drew Wild Draw 2 etc. from the deck in the scene where the player of the next turn had one remaining hand was involuntarily doing a guts pose. 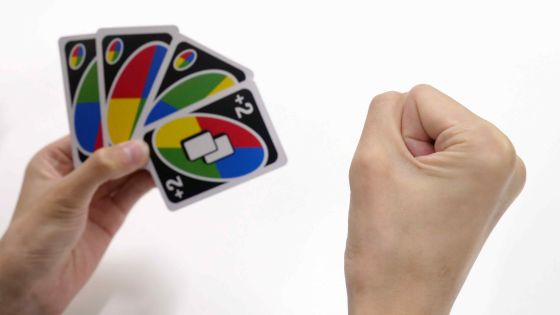 When I actually played 'Uno All Wild', it was possible to issue cards in any situation, and the point to be concerned about was 'issue a normal wild card' or 'issue a special wild card'. Only one. This complicated bargaining is basically gone, and it feels like 'let the next player draw two cards,' 'skip the next player,' and 'reverse the order of drawing.' Anyway, I will put it out first. '

On the other hand, since I want to use 'all exchanges for the opponent's hand' at the end of the game, I have to keep it, and instead of going fast during play, I'm more than ever 'who has how many cards?' It is necessary to pay attention to it strangely, and if you bring it to the state of 'Uno!', There will be many situations where you will almost win. Since we will concentrate on 'how to aim at the player with a small hand and pull the leg together', there are many situations where we forget to say 'Uno!' Surprisingly. 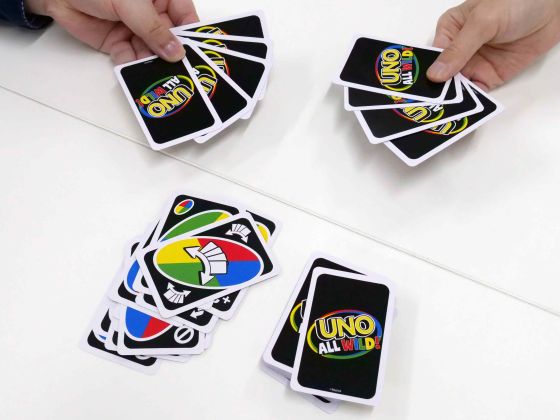 In addition, it is necessary to always keep track of the hand, even in situations where it is not necessary to pay attention to it if it is a normal Uno, such as 'If you skip here, the opponent will surely take out all the hands'. As it comes, it gradually becomes clear that a few mistakes will immediately lead to someone's victory, so I forget to say 'Uno!' Again and point out 'I didn't say Uno!' The strategy will be in a state where it will be activated considerably.

Also, if you draw a lot of sheets, you will almost lose the chance to win, so even if you are in a situation where you are killed for a while with normal Uno, even if you play 6 players, the tempo is good enough to settle in about 1 to 2 minutes. As the game progresses, the result is a 'next!' Feeling and switching is quicker. This area is composed of aggressive rules, and it helps to reduce the stress source of Uno who has no card to defend, so play with crispy cards as a basic matter anyway. Is recommended. As a result, unlike normal Uno, there aren't many long thoughts like 'whether or not to put this out'. Moreover, since 'the card you have first decides whether you are alive or dead' more than normal Uno, it is not suitable for cases where 'a card game with a strong luck factor may be less strategic'. To put it the other way around, it's the best card game for when you say, 'If you think too much, you always lose ...' or 'I don't want to have a long play time.'