What is the position of the big campaign of 'Belgium delegates scored 16 points or more and refund the TV purchase price in full?' 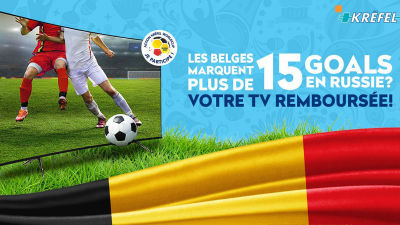 "Belgium" who broke Japan in the first round of the FIFA World Cup 2018 final tournament beat Brazil in the quarter-finals and entered the semi-finals. Some Belgian citizens who "bet" in the campaign of the home appliance mass merchandisers say, "I will refund TV purchase fee depending on the Belgian representative's success!" On the red satan's dynamism.


There is no doubt that Belgian citizens are boiling with the success of the Belgian delegation, but especially those who purchased television at home electronics mass retail store " Krëfel ". Krëfel made a campaign saying "Before returning to the World Cup / Russia tournament, if Belgium is scored more than 15 points, we fully refund the purchase price for the TV" before the World Cup started.


"Let's enjoy this year's World Cup at the front seat on a Belgian national fans? Good TV, if the Belgian team scores more than 15 points TV is completely free.Krëfel will refund the full purchase price Krëfel who was raiding an oversized campaign to guarantee. However, TV is targeted for large size of 55 inches or more. In the past, Brazil cited 18 goals at the 2002 Korea Games, Germany gave 16 goals at the 2010 South Africa Games and 17 goals at the Brazilian Games in 2014, a figure of more than 16 goals is by no means impossible It is not something. Belgian FW Dawsy-Meltens athlete refraining from coming to Japan that will be the first round of the finals tournament "There are a lot of friends who bought television, so that they can buy TV for free, I will do everything I can "This campaign seems to be a big topic in Belgium, such as skipping a joke.

And Belgium cited three goals against Panama, five goals against Tunisia, one goal for England, three goals for Japan, two goals for Brazil, and a total of 14 goals at the time of article creation, I have 2 more points to go. Belgium who already decided to advance to the top four already has two games since there is a third place determination game even if he loses in the semi-finals, and it seems likely that the possibility of achieving more than 16 goals is high.

There are thousands of people who purchased relatively expensive television with 55 inches or more with Krëfel. The total price of this television price seems to be considerable. However, Bernard Hubert, marketing director of Krëfel, says, "As with any actions and promotions, we assume a variety of scenarios to determine whether this" bet "will become a reality or not, And there is the concept of "insurance" in order to realize such a large event, "he revealed that insurance was put on assuming Belgian representative's big success It is.

According to Mr. Hubert, "payment of premiums is considered as advertising expenses." It is not Krëfel who is sweating the activity of Red Devil, it is said to be an insurance company in London.