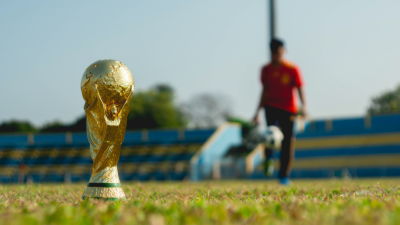 About the 2018 FIFA World Cup which finally decided the team to advance to the finals, infographics which summarize figures on goals, money, etc. are released.

• Chart: Which Clubs Benefit Most From the World Cup? | Statista
https://www.statista.com/chart/14301/fifa-payments-to-clubs-of-world-cup-players/

• Chart: The Highest-Paid Managers at the World Cup | Statista
https://www.statista.com/chart/14360/the-highest-paid-managers-at-the-world-cup/

The following infographs describe which time of the game the 84 goals (actually 85 goals) recorded at the end of the Group League Section 2 at the 2018 FIFA World Cup were determined. The goalmark is red is the goal determined for the additional time. The number of points scored the most at the end of the game after the latter half of 76 minutes, the number of points scored for the additional time is 10 goals. Next, 17 goals in the time range of 46 to 60 minutes after the latter half start, 15 goals after 31 minutes just before the end of the first half have been decided. Overall it seems that more goals have been decided in the second half. England's first victory in the World Cup match against the PK in the first round of the finals tournament. This is based on the country representative of the legend Gary Lineker tears was a historic feat of the more. The following infographs showed the result of the PK game that England representative won in World Cup in the past 28 years. England national players have experienced many failures in PK, but when analyzing this with a video, it seems that they can see the appearance that many unsuccessful players are hurting to kick as soon as possible. Therefore, in England it seems that he is practicing to consciously slow down and kick PK from the fostering age, and finally the measure has finally come true. The following graph shows 157 scores aggregated at the time of the best 4 of the 2018 FIFA World Cup, classified according to the belonging leagues of the players. As you can see at a glance, it is the players belonging to the Premier League of England 's mother country of football who are taking the most points, recording 46 goals which accounts for about 30% of the total. It is an indication that the world's top players are playing in the Premier League and it shows that the source of the power of the England national who advanced to the best 4 in the same competition is in the competitive domestic league. 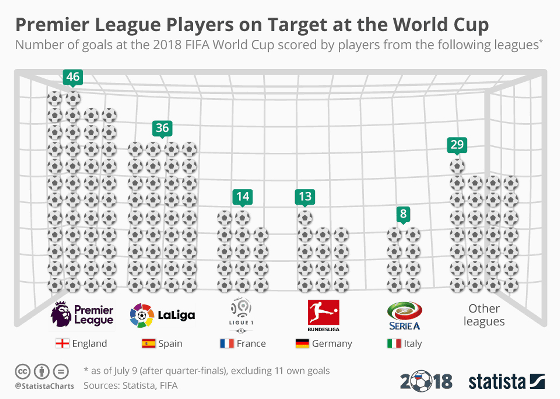 
2018 Which team is paying the most salary to the director out of the teams that participated in the FIFA World Cup? The following infographs describe the top ten supervisors who are obtaining the most salary among the directors of the World Cup participating countries. German national team coach Joachim Reve, who lost most of the salary in Group League, gained 3.8 million euros (about 500 million yen). Subsequently, Brazilian national team coach and Ducati French director Didier Deschamp will continue with 3.6 million euros (about 470 million yen). Among the coaches who ranked in the top 10, the director of Deschamp of France and the director of Gareth / Southgate of England are leading the team remaining in the top four. In addition, it is clear that Akira Nishino, directing the national team, received approximately 120 million yen. The World Cup is not only the largest sports event in the world but also a huge business. The main source of income for the World Cup comes from the sale of broadcasting rights fees and marketing rights. Based on the Brazilian Games in 2014, the details of the money produced by the World Cup will be infographically as follows. The total revenue from the World Cup is 4.83 billion dollars (about 540 billion yen), and the TV broadcasting fee is about 2,428 million dollars (about 270 billion yen), accounting for about half of the total income. It is followed by marketing rights ($ 1.58 billion), ticket revenue ($ 527 million), hospitality right ($ 188 million) and license right ($ 107 million).

In the World Cup, $ 8530 a day (about 950,000 yen) will be paid per player. This payment starts two weeks before the opening game and will continue until the team defeats. So where is the football club where the most money to be paid to players participating in the World Cup? 2018 The following infographs summarized the top 10 soccer clubs who received much payment from FIFA in the FIFA World Cup. Real Madrid got the most payment at 3,963,600 dollars (about 440 million yen). As a football tournament by the club team, Real Madrid, who achieved the three-consecutive title of the UEFA Champions League , the world's highest stage stage, has received the greatest payment, so it is often on the world's best stage of the world cup I can understand where the club sending the athlete is.