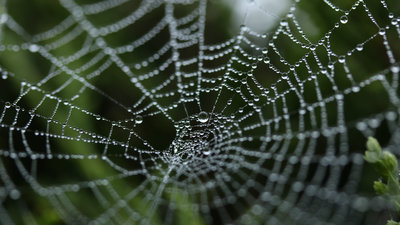 If GIGAZINE "gigazine.net", Yahoo! If it is JAPAN, there are so many domain names on the Internet as "yahoo.co.jp", so you can not take the domain name that was previously acquired later. ".com" ". Net" ". Org" The three biggest domains in the three domains are what is the oldest things, the engineers who cared about the execution of whois queries open to the public information. 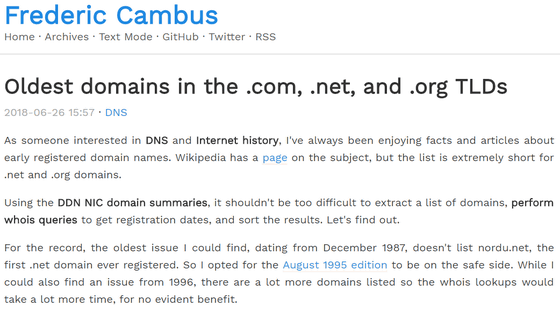 Frederic · canvas of Software & Network Engineer who lives in Rzeszow in the southeastern part of Poland investigated. I am interested in the history of DNS and the Internet and I read various articles, and I noticed that Wikipedia's " oldest Internet domain registration list " was not fulfilling enough except ".net" I heard he did.

The canvas went by,
1: Extract domain list using domain summary of DDN NIC
2: Run the whois query against the acquired domain and obtain the registration date
3: Sorting in order of registration date.

However, although it is said that the domain summary is old as a version of December 1987 was found, since there was no description of "nordu.net" which is the oldest .net domain, and there was difficulty in reliability , It was based on the August 1995 version.

As a result, the top 10 of each of the oldest domains became as follows.


.com The first thing was "symbolics.com", which was acquired by a computer maker "Symbolics" that existed from 1980 to 1996. This domain name still exists at the time of article creation, but since Symbolics was sold to investment company XF.com (now napkin.com) in 2009, it is now irrelevant.

Other domains such as high-tech manufacturers and manufacturers involved in the military industry are listed. IT world giant · IBM "ibm.com" is the 11th, Sun Microsystems' sun.com is the 12th, Intel's "intel.com" is the 13th. However, Apple's "apple.com" is a little late, 64th, Microsoft is not in the top 100.

The second "broken.net" said that a person named Jason Matthews registered, but details are unknown. The 3rd "nst.net" is the National Science Foundation Network, 4th "uu.net" is one of the largest ISPs in North America, and it seems that there were a lot of registrations of network related businesses and organizations.

By the way, on the canvas' s site, the top 100 is published to each domain.