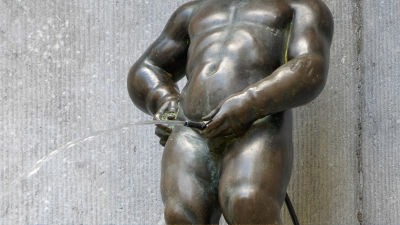 A lot of people think that it is a smell of chlorine as a cause of smell of pools in a swimming pool. The smell of such a pool is actually "The smell of chemicals that the urine reacted with chlorine in the pool"Chemical substances generated by the piss are harmful to the human body and science mediaScienceAlartIt reports.

That 'Clean Swimming Pool' Smell Is Actively Bad For Your Health ... And Really Gross
https://www.sciencealert.com/that-clean-swimming-pool-smell-is-actually-bad-for-your-health-and-really-gross

Even in the pool that looks beautifulIt contains 75 liters of urineIt has been reported from the past that it is a star of the swimming world who won a large amount of gold medals at the Olympic GamesMichael Phelps"I think everyone is having a pee in the pool." Pee in such a pool reacts with chlorine used for water disinfection,Nitrogen trichlorideIt is said that it will produce the chemical substance.

Nitrogen trichloridePierre Luis DallonIt was discovered in 1811 by a scientist called Mr., and has the property of reacting easily and exploding with a slight stimulus if it is a single body. Mr. Darron of the discoverer also took a big injury of losing two fingers and one eye due to the explosion of nitrogen trichloride, but the nitrogen trichloride present in the pool is mixed with water and other substances, There is no possibility of exploding only by swimming in the pool.

However, nitrogen tetrachloride is a substance that has toxicity, although it does not explode in the pool,Eyes turn red when entering the poolIt is said to cause or cause inflammation in the respiratory tract. Nitrogen trichloride is a volatile chemical substance, and nitrogen trichloride produced by reaction of chlorine and urine in the pool vaporizes near the pool, and it causes common "smell of the pool" to be said. Vaporized nitrogen trichloride has an adverse effect not only on people swimming, but also on people walking around swimming pools such as swimming school coaches walking around the pool and lifesavers. By lowering the chlorine concentration in the pool, it is possible to reduce the amount of nitrogen trichloride that occurs with the urine, but from now you can practice a solution "take a shower and take a shower and sweat Rinse off and go to the urine beforehand ". Not only people going to the swimming pool but also amateurs and professional swimmers should be aware that sweat and pee produce harmful chemicals and should not be allowed to swim in the pool thought they are troublesome.

Whatever measures are taken beforehand, it is inevitable that you will want to have a pee if you swim in the pool for a long time, and those who think that "it is embarrassing to go to the bathroom" when it is so There are a number. People in the area have awareness that "It is not embarrassing to go to the bathroom in the middle of the pool", and the pool side also made a toilet in the changing room, "That person came out of the toilet now It is necessary to take measures so that other people do not understand such things as.