"Robot Kit" of "Nintendo Labo" What is the haste like photo review, the cardboard contents? Cardboard and "Nintendo Switch"Robot Kit" which can make "robot Toy-Con" that can manipulate the robot using whole body was released on Friday, April 20, 2018, so actually try purchasing and playing down I decided to.

That's why I got it immediately "Robot Kit". I put iPhone X on the box and it is like this. On the side of the box, the contents of the set are indicated by illustrations and letters. 19 cardboard sheets, 4 cardboard sheets, 1 retroreflective sheet, 2 orange and blue pimples, gray flat string like a band is large (1) · medium (1 ) · Small (2), Hatome set connecting corrugated parts are 10 gray and 2 orange. On the back of the box is divided into three elements of "Nintendo Labo's making" "play" "understanding", and it is easy to understand what kind of things can be done with Robot Kit. That's why I opened it quickly. Inside there are cardboards written as "Getting Started" and game cases for the Robot Kit. When opening the case with Pakari, it looks like this. At the bottom right of the case is a dedicated game card, in which a cube shaped robot is drawn. Below that, various parts for robot Toy - Con were stored. Take out like this. Especially cardboard sheets are large. Since it will be about this thickness when stacking cardboard sheets, it seems good to start assembly at a certain timing as it is. The corrugated cardboard contains fine cuts so that it can be easily removed, and it is easily detachable with bare hands without using scissors or a cutter. Since the alphabet is swinging like A, B, C, D ...... on the upper left corner of the cardboard sheet, it seems to be useful for finding the target part at the time of assembly. There are parts such as straps and eyelets in the plastic bag. This is a gray flat string. There are two Orange and Blue pimp each. The eyelet set has 10 gray and 2 oranges. This is a retroreflective sheet. It is a white seal, it is hard to understand if it is a picture, but it is cut finely. Once you start the game you can see the assembly instructions. Amazon.co.jp Robot Kit with limited benefitsIn the case of the corrugated cardboard sheet with the following dumbo ... ... A special masking tape comes with it. On the masking tape the arrow and the letter "OPEN" were drawn. So, you can check how you actually made robot Toy - Con in the following article. 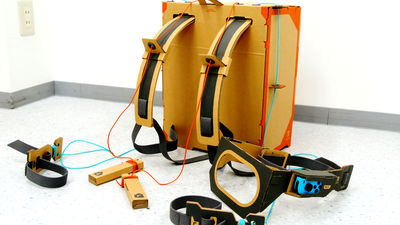 In addition, please check the following article to see how to make robot move all over the body using robot Toy-Con made. 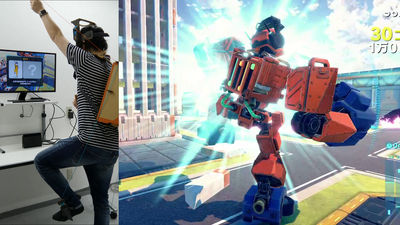 You can also customize the robot you use during the game freely. It is necessary to create dedicated parts for custom, and it is possible to check all the details up to custom with the following article. 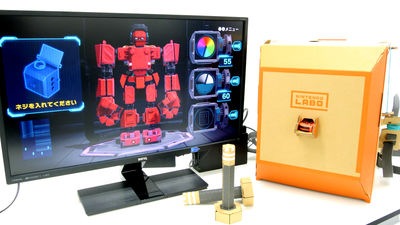