Assemble the cardboardNintendo SwitchI will make it a dedicated peripheral device "Toy-Con""Nintendo Labo Variety Kit"Toy - Con was recorded, and I tried playing it by actually assembling "remote control car Toy - Con" which is one of them.

You can see what the contents of Variety Kit is like by following article. 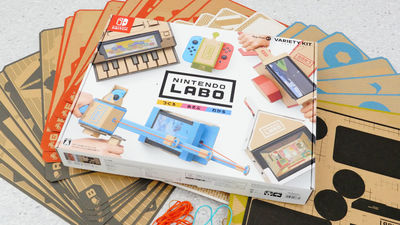 When I started "Nintendo Labo", the controller update began. As soon as you start, first of all, as a practice of assembly, I will make a Joy-Con holder. Prepare cardboard of black frame with light bulb icon drawn. This cardboard is a sheet that can make original Toy-Con materials and decorations. Nintendo Labo software will tell you which sheets to remove and which parts to remove. It is easy to remove parts from cardboard even with bare hands, you do not need to use scissors, cutter knife, etc. A fine jagged edge is attached to the edge of the corrugated cardboard so that hands can not be cut short in the cross section of the cardboard. Pull out the parts from the sheet as instructed and fold along the fold line. Within the screen of the Switch, the location and order of folding are instructed in the movie, so even small children can easily understand. However, it is impossible to skip even though the movie can be fast-forwarded, so it will take a considerably longer time than the actual work. There is no need to use bonds or glue to assemble. However, as both reinforcement and decorationThe use of masking tape is officially recommended. About 3 minutes to complete Joy-Con holder. This concludes practice. I will move on to the assembly of the remote control car Toy-Con at once. The basic parts of the remote control car Toy - Con are only the following two. We will assemble while watching the explanation. Antenna is attached to the part hitting the back of the remote control car body. Care must be taken because only the outer frame must be folded so as not to break this antenna. The following image was completed in about 15 minutes. The switch antenna on the left and the remote control car body on the right. The Switch antenna plugs into the slot part to which Joy-Con of the Switch body is attached. Joy-Con +/- button and the +/- icon printed on the main body can be inserted until it is aligned OK. You can see where you actually operated the assembled remote control car Toy - Con in the following movie. The left and right Joy-Con are displayed on the screen of the Switch body, and when you tap, the corresponding Joy-Con vibrates and the remote control car moves. In addition, it is also possible to adjust the frequency from 200 Hz to 120 Hz by moving the slide bar. In addition, you can also play in the two-player battle mode by using two sets of Joy-Con. Switch Displayed on the remote control. By tapping the camera screen, you can select the night vision scope style screen and the thermal camera style screen. Furthermore, using "automatic driving mode", you can run the remote control car automatically using the IR camera, and you can also create a course for automatic driving using the attached IR-only reflection material seal. If you shake your hand in front of the camera of the remote control car you are traveling, you can see the camera recognizes and runs in the following movie.