Saturn's satellite "EnceladusIt is reported that carbon dioxide, methane and hydrogen are present in the condition of living body survival. In the deep sea of ​​Enceladus there was an environment similar to the Earth and it was said that microorganisms could have evolved, but finally researchers have succeeded in breeding deep-sea microorganisms under the same conditions as Encradus "We announced.

The surface of Enceladus is covered with ice, but we know that the ocean exists underneath. "Life on the earth was born by a chemical reaction occurred in the vicinity of hydrothermal vents in the sea", but it is clear from the study of scientists that hydrothermal vents exist in deep sea area of ​​Enceladus , It means that "the condition of microbial generation is in place in the deep sea of ​​Encheladus", and there is a growing expectation that there may be microorganisms in Enceladus. 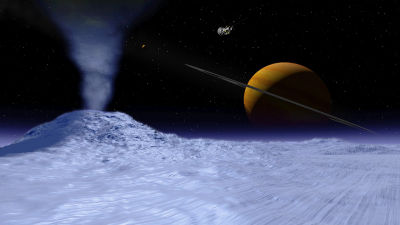 Therefore, researchers created an environment same as the vicinity of hydrothermal vents in the deep sea area of ​​Encheladus artificially in the laboratory, and conducted an experiment to breed microorganisms. As part of the investigation of Enceladus,NASA's Saturn probe "Cassini"Blows up from the surface of EnceladusRush into a geyser, Water · methane · carbon dioxide · ammonia · molecular nitrogen · carbon monoxide ·ethyleneAnd substances such as molecular hydrogen are found to exist in the sea of ​​Enceladus. In the experiments, we created an environment in which these substances are contained, water pressure is applied at the same level as the deep sea of ​​Enceladus, and three kinds of inhabiting in the vicinity of the earth's hydrothermal ventsAnaerobic methanogenic archaea(Methanothermococcus okinawensis, Methanothermobacter marburgensis, Methanococcus villosus) were cultivated.

As a result of experiments, bacteria of the type "Methanothermococcus okinawensis" out of the three kinds of methanogenic archaebacteria breeded normally even in the same harsh environments as Encorradus deep sea. "Methanothermococcus okinawensis"Okinawa troughNearbyIheya RidgeIt is said that methanogenic archaebacteria detected from hydrothermal vents present in the plant have extremely high resistance to heat and the like. Methanogenic archaebacteria have the property of absorbing carbon dioxide and releasing methane, and methane detected by planet Enceladus may contain methane released by bacteria about. He is a scientist working for Southwest Laboratories in San AntonioChristopher Grain"This discovery extends our thinking about the existence of living things greatly," he says.

However, at the time of writing the article, the idea "There may be microorganisms in Enceladus" is just one scenario. In order to ascertain whether Encheladus' methane is really derived from bacteria or natural phenomena such as hydrothermal vent holes, it is necessary to send another exploration vessel equipped with a high-performance inspection device to Enceladus again.

For NASA, who leads space exploration, Enceladus is only one of several exploration targets. At the time of writing the article Jupiter's satellite "Europa"We are focused on exploring hydrothermal vents and we can not afford to limit the limited resources to Encaladus' re-exploration. Researchers wishing for exploration of Enceladus must compete with many researchers who wish to investigate other planets and satellites in the solar system. A microbial researcher at the University of Vienna who led the current researchSimon Littman"There is a high possibility that microorganisms similar to Methanothermococcus okinawensis are inhabited on other planets, it is very interesting to investigate the presence of microorganisms in future exploration." In order to realize the re-exploration of Enceladus, it is necessary to appeal the importance of Enceladus to all over the world by accumulating new discoveries like this time.

A planetologist who was involved in the project of the exploration vessel CassiniJonathan Lunin"We need more reasons to investigate Encheladus with precious resources and to explore the signs of life," he said.