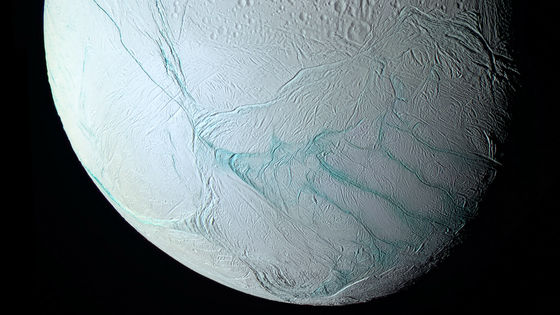 Saturn's second satellite, Enceladus, is a star whose surface is covered with thick ice, and hydrogen has been detected from the sea under the ice , so it has been considered to be a `` star with extraterrestrial life '' It was. Enceradus has newly detected organic compounds, and the possibility of the existence of extraterrestrial life has further increased.

Enceladus, Saturn's moon, has a geyser that erupts ice-like material. In this geyser, an organic polymer with several hundred atoms arranged in a ring or chain was discovered in 2018, and it was pointed out that this may be the excrement of extraterrestrial life. In the same way, in the investigation of substances ejected from geysers, the discovery of a new type of organic compound as an amino acid component was published in Oxford Academic, an academic journal at Oxford University in October 2019. The paper is revealed.

From Enceladus geysers, the seawater that sleeps in the basement warmed by the heat released from the nucleus of the planet is released into the universe as water vapor and ice particles. Previous investigations have revealed that ice particles released from geysers are compounds containing nitrogen and oxygen. Since these are the sources of many lives, researchers have been actively investigating that some kind of life exists in Enceladus.

The organic compound discovered this time seems to be used as part of a chemical reaction that produces amino acids, which are components of life on Earth. Researchers speculate that this organic compound may act in the same way in the hydrothermal vents in the underground of Enceladus, leading to the production of amino acids. 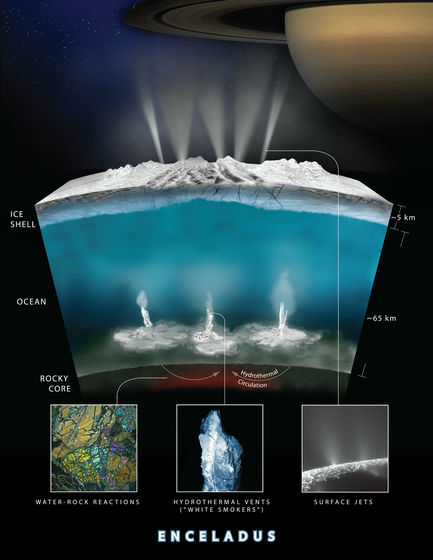 The announcement was made by a research team at the Free University of Berlin. Nozair Khawaja, who led the team, said, “If you have the right conditions, these molecules that erupt from the deep waters of Enceladus may show the same reactions that are seen on Earth. Amino acids are necessary for extraterrestrial life. I don't know if it's a thing yet, but the fact that it forms an amino acid is an important clue to know about extraterrestrial life. '

Saturn spacecraft Cassini has its operation in 2017 end and, to enter the atmosphere of Saturn burned out directly below. However, Cassini has collected a huge amount of data and is still analyzing it. Khawaja and his team also analyzed the data collected by Cassini's Cosmic Dust Analyzer and succeeded in detecting ice particles released from Enceladus.

This is an illustration that shows how organic compounds dissolved in the ocean of Enceladus (OCEAN) under the thick ice layer (CRUST) evaporate from the surface of the water and freeze inside the ice layer vents. 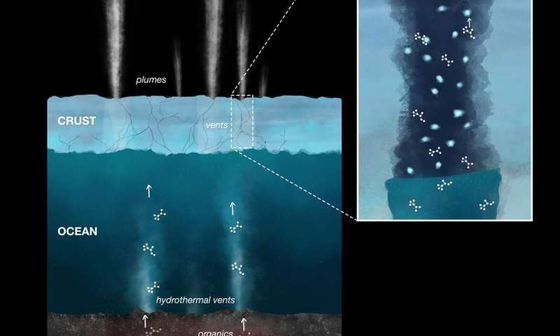 John Hillier, a member of the research team, said, “We have discovered small and soluble organic compounds. These are amino acids and other substances necessary for life on Earth. “It shows the potential for abundance of highly reactive compounds in the ocean, and it can be one of the breakthroughs in investigating the potential of life to Enceladus.”