Saturn's satellite that had been reported that carbon dioxide, methane, hydrogen existed and living body survival conditions were all availableEnceladusResearchers announced the existence of hydrothermal vent holes in the deep ocean. It is said that the life on the earth started from the occurrence of a chemical reaction at the hydrothermal vent, so the possibility of microbial evolution has also increased in Enceladus by this research result. The surface of Enceladus is covered with ice, but the ocean exists under the ice and it is known that there is thermal activity. In addition, it is known that carbon dioxide, methane and hydrogen are present by the survey so far, "There was enough time for Encieladus to breed and evolve as a microbial alien for billions of years," It is thought.

NASA detects hydrogen from the sea that sleeps under the ice of Saturn's satellite "Encelados", the condition of life organism survival matches - GIGAZINE 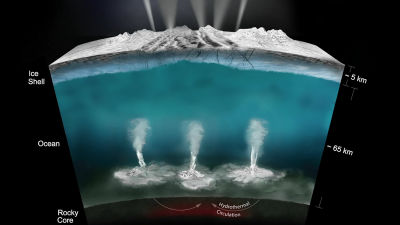 According to a newly published paper by Nature Astronomy,NASA's Saturn probe "Cassini"The survey of the data gathered, it is clear that how Enceladus is able to maintain the ocean. If the ocean of Enceladus was heated only by the tidal power that occurs under ice, it should have been frozen in less than 30 million years, but as there is still as an ocean in 2017, some force other than the tidal power works I was supposed to be supposed to have been.

Researchers created a model consistent with the observations of Cassini to explore this reason and found out that the core of the satellite is porous because it keeps the ocean of Enceladus as a liquid. The water passing through porous rocks is overheated, at temperatures above 90 degrees CelsiusUpwellingTo do. Many such hot spots have been observed near the Antarctica of Enceladus, and it is reported that ice near the Antarctic is thinner than the other due to the high temperature. Researchers have shown an analysis that the ocean can keep 10 million years by this overheating mechanism. Generally, it is said that chemical reaction occurred in hydrothermal vents in the deep ocean where life could evolve on the earth. Even in Encheladus, the existence of hydrothermal vents similar to the Earth has been confirmed, indicating a great possibility that life has evolved.

Gael Choblet of the French National Center for Scientific Research who researched on Newsweek's interview "Although the existence of aliens can not be preserved, the fact that hydrothermal activity exists enhances the possibility that microorganisms have appeared" ifHypothesis announced last yearIf it is correct, there is a possibility that active hydrothermal activity has been done since the time of the satellite, and it was done from the time of the solar system at the same time. "

Also Professor Ravi Desai at Imperial College London did not participate in this study, "These findings at Enceladus are also related to ice-covered Jupiter, which is Jupiter's satelliteEuropaYaGanymedeThinking about that, this discovery is very exciting. "

The research team is planning to simulate the interaction of chemicals that occurred in Enceladus in the future, and to investigate how chemical substances and fever will spread the ocean.