What is necessary to regain the sense of controlling my life and make my child voluntary? A couple of years ago, "The children with high performance are exposed to great stress and they are lacking in true sense of motivation" to the clinical neuropsychologistWilliam R. StixrudMr. and tutorial service "PrepMattersRepresentative of the writerNed JohnsonMr. 2 people noticed. The two who started the investigation arrive at the conclusion that the antidote to children's stress is "to give control over their own life". However, this means that "parents will not waive all discretion", and the two co-authors "The Self-Driven Child"Describes how to relieve children from stress and to tackle new issues from themselves.

The Case for the "Self-Driven Child" - Scientific American
https://www.scientificamerican.com/article/the-case-for-the-ldquo-self-driven-child-rdquo/

I do what I regard as meaning by myself, the feeling through success and failure feeling "the sense of controlling my life by myself" is related to mental health such as anxiety / depression at a high ratio in addition From the 1960's it was also found that the problem of mental health related to stress of children is increasing. Especially, the incidence of anxiety and depression of young people has risen rapidly in the last 6 to 7 years.

From a neurological point of view, when there is a sense of healthy control, it plays a major role in the processing and memory of emotional responsesAmygdalaIsPrefrontal cortexIt is controlled and it does not feel big anxiety. However, when the children are feeling big anxiety, essentially the amygdala becomes more active, making it easier for feelings of helplessness and stalema to be felt.

According to Mr. Stixrud, it is necessary for children to set their targets with enthusiasm and to be able to self motivate themselves in order to enjoy achievement, and that "autonomy" is the key to that , It seems that many of the children Mr. Stixrud met could not be self-motivated. Two points were seen in their motivation pattern: "obsession for success" and "nothing to work hard". And these children were overwhelmed by their demands, were always tired, and had no time to rest. The problem of self-control is not new, but comparing the university students of the 1960s and 2002, it is found that the feeling that university students in 2002 are controlling their own lives by themselves is dramatically lower It is. Such a decline in the sense of control over my life seems to be caused by a decrease in the play time of children, the schedule management of the activity, the time to go to the device screen of the smartphone and so on has increased It is. In addition, children of recent years are decreasing sleeping time, and it is said that 50% of teenagers over the age of 15 have an average sleeping time of less than 7 hours. In order that boys and girls do not feel tired, an average of 9 hours of sleep is necessary, so the connection between the prefrontal cortex and the amygdala is weakened due to shortened sleeping time, and the prefrontal cortex can not properly control the amygdala body It is also thought that it is. Styles said that children with reduced control feeling due to fatigue easily feel stressed and their ability to cope with things falls and they are more likely to experience frustration and disappointment.

Of course, the emergence of technology is also greatly related to the deterioration of the sense of control over the lives of children. The act of submitting photos to SNS and waiting for judges to be judged from the surrounding people is just an act of lowering self control. In January 2018, the happiness level and satisfaction level of American teenagers have declined sharply after 2012, and the findings that smartphone ownership ratio is greatly related to this phenomenon were announced. In the survey, a video game poisoned boy stated that "I know that I should not, but I can not stop it," said Stixrud, which is a demonstration of "loss of control sensation" It is.

Research results, such as smartphone · PC · TV, that the activity through the display degrades the happiness degree - GIGAZINE 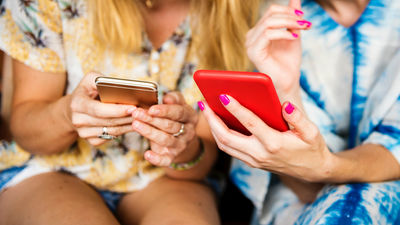 The idea that motivation can be enhanced by satisfying the three essentials of "autonomy" "competence" "relation" human beings is called "self decision theory", according to self decision theory, this 3 Motivation will fall if one of the desires is missing or a motivation based on "fear" will be built. Therefore, acts that control your child and deprive of "autonomy" can be said to have an adverse effect on motivation.

For example, trying to hire a tutor as a result of poor grading in mathematics, but think of your child's resistance to it. The act of forcing the child to give a tutor by pushing the resistance of the child stresses "the relationship between myself and the child", and even if it was able to raise the grades, "autonomy" and "relation It will be lost, and what you lose will be bigger than what you get from a big perspective. When a parent sends a signal to a child that "children's opinion is irrelevant" or "I know better", it is for children to regard themselves as such on their own judgment.

Children are exposed to a lot of stress at school, "home" should be a place that can be relieved from the stress if it is originally supposed to be a place to rest, but if parents want to control children with anxiety , The child can not rest. In that case, the child looks for places where other rests can be rested, and in more serious cases the brain exposed to chronic stress can also cause disease.

Therefore, Johnson says parents need to give children the place they can be safe, and to give "challenges within handling" challenges. Video games are superior in this respect, the task becomes more difficult as the level of the player goes up, and it is possible to start over again even if they fail. In the real world children like to go on "success" like games, and that children should give opportunities to extend their ability to burn passion. Johnson says that the sense of "mastery" and "autonomy" that you gain when you go to your favorite things can be used in other aspects of your child's life. In other words, in order to create a child who can self-control and motivation, it is important to give a place where you can take a rest, to make your sleep firm, and to give time to play. Many of the children Johnson saw were complaining about parents stuffing the schedule at free time. Rest is a different thing from laziness, it is the part that becomes the basis of activity. Without smartphone or screen,Default mode networkJohnson said that it is necessary to activate the neural circuit called the prefrontal cortex and the amygdala properly.