It is known that there are a certain number of earth planarists who think that "the earth is not flat but balls" in the world. "If no one tells the truth, I will prove it myself," I developed a rocket to prove that the earth is flat on its own, and that "mud" microphone that was stopped by the authorities just before launch - Mr. Hughes is raising a new rocket launch plan.

Mr. Hughes,Cloud funding siteIn the following article you can check the history of how you planned to cancel the plan just before the launch, recruiting funds from the earth planarist as well as making a rocket for a total of $ 20,000 (about 2.2 million yen). 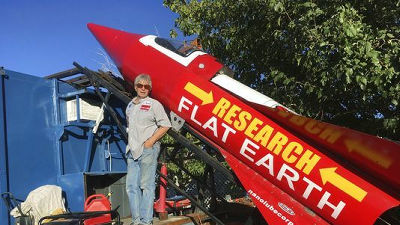 It is natural to have the question "Mr. Hughes' rocket really fly to the sky", but in fact Mr. Hughes successfully launched the rocket in January 2014. In the "steam-powered rocket" mechanism which is also called an applied version of the PET bottle rocket, the state of the first flight which reached the sky about 400 meters can be confirmed in the following movie.


Mr. Hughes with outrageous action power succeeded the cloud funding, raised "RESEARCH FLAT EARTH" on the side of the aircraft of the rocket, got the consent of the landowner, and was preparing to launch at last After all, the launch of the rocket did not come without permission from the Land Management Bureau.

As far as you see the pictures, you can check the cockpit on which the pilot boards. If launch is permitted, it is a concern whether Mr. Hughes truly got on. One reason why Mr. Hughes was not allowed to launch the previous rocket was that the rocket was at risk of falling into the property owned by the Land Management Bureau. Therefore, the rocket planning to launch this time plans to launch it vertically instead of drawing a parabola and drop it. With this, there is no fear of destroying the public property managed by the Land Management Bureau if it gains the consent of the landowner. Mr. Hughes announced on the Facebook that rocket launch test "will be done on February 3". Mr. Hughes is planning to do this launch without spectators either because attention was gathered because of the big news report and the permission from the Land Management Bureau did not go down.

The development scenery of the new rocket is uploaded on Facebook. It seems that attention will be drawn to Mr. Hughes who is sending daily life for rocket development alone by himself whether he can launch a rocket.