For many people it is understood as common sense that "the earth is a sphere", but insists that "the earth is a flat disk"Earth plane theoryThere is a person who advocates. In order to prove that theory, one earth planarist tried to launch a rocket casting its own expenses, but it has to be stopped shortly before the end.

Standing next to the rocket, "Mad" Mike Hughes who tried this launch. It is a 61-year-old man who usually seems to have continued his research on rockets by himself as a driver of a limousine as a driver. Mr. Hughes casts about 20,000 dollars (about 2.2 million yen) to create a launch pad that remodeled his own rocket and camper. We launched this rocket from Needles, California, aiming to prove that the planet theory planned by themselves is correct, but that wish has been suspended for the time being. By the way, this rocket is "Steam rocket"(Steam-powered rocket) is said to be adopted a less familiar mechanism. Its principle is to put water in a tank at high temperature and high pressure in the tank and to launch it in the sky with the power of steam that jumps out vigorously when opening the valve. The reason for being forced to stop was because the authorities said "Launch is not allowed". According to Mr. Hughes, just before the launch planned on Saturday, November 25, 2017 (Saturday), 2017, from the Land Management Bureau belonging to the US Department of the Interior "At least, launch in the planned place can not be permitted" It seems that this time it has become a situation that I have to abandon this time.

Mr. Hughes has been preparing for over one year, and from that authorities he said that he was told that "the permission of launch is up to the judgment of the Federal Aviation Administration (FAA)" Thing. The FAA said that he was getting a reply saying "It can only be told that we are going to launch there because we can not approve to be honest" Apparently it seems that it could not be said that the authorities gained reliable approval.

Furthermore, in addition to the problem of licensing and approval, in fact, when trying to put out a set of equipment from home at Wednesday scheduled to head to the launch site, the launch pad and the rocket remodeling the camper was hit by the trouble. Mr. Hughes said that he plans to re-challenge even on the week of November 27, and asks them to watch their website and YouTube channel "I want everyone to watch the situation as it is". However, the YouTube channel can not be found at the time of writing the article. 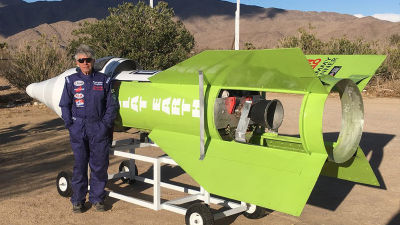