'Ultimate TKG' haste review that completes cloud-like fluffy egg over rice in just 5 minutes, it looks like this when actually made 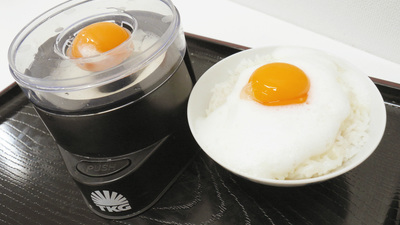 Takara Tomy Arts will introduce ' Ultimate TKG, ' which Japanese people love to make 'rice with eggs,' or 'TKG,' for short, with a fluffy new texture. Since it is a super machine that automatically finishes the white part into a fluffy meringue shape, I was able to borrow it a little earlier, so I checked what kind of machine it was and what the ultimate omelet rice was. I tried it.

This is the 'Ultimate TKG' package. Function explanation is posted next to the package. Instead of breaking the egg by yourself, just set the unbroken egg and press the button, and it will even separate the white and yolk. 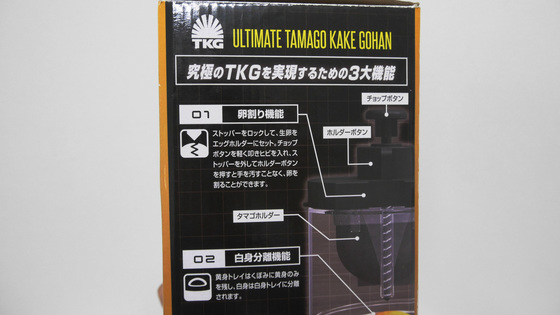 Also, I was surprised at the 'high-speed stirring function' that electrically stirs the white meat until it becomes fluffy when the switch is pressed. Looking at the picture of 'stirred white meat', the white meat is beautifully meringue-like. The power to stir the white meat is supplied from two C-size alkaline batteries. The target age is set to 15 years or older, probably because there is a rotating part. Inside the box were the main body, instructions, and a care brush. Since each part of the main body can be easily disassembled, it is easy to maintain. When you push the button on the lid firmly, the inner 'egg holder' will open. 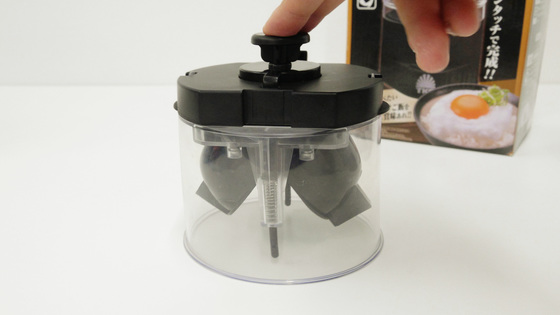 This is the 'yolk tray' that separates the white and yolk. The yolk remains in the hollow in the middle, and the white meat goes down through the gap in the yolk tray. And here is a mechanical box that automatically stirs the white meat spilled from the filter as it is. The black body has a 'whipped switch' with a smart white logo underneath. 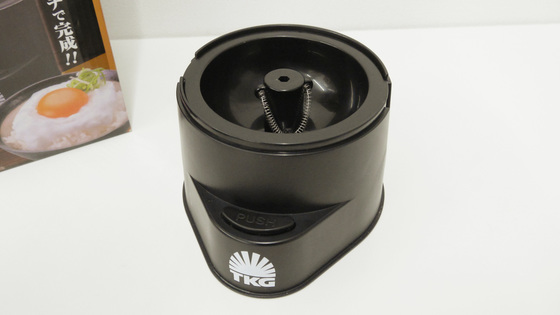 When you press the button, the spring part in the center rotates vigorously, and the white meat is efficiently and fluffy like a hand mixer. The operation sound without eggs is quite loud, and you can check how loud it actually is by watching the following movie. 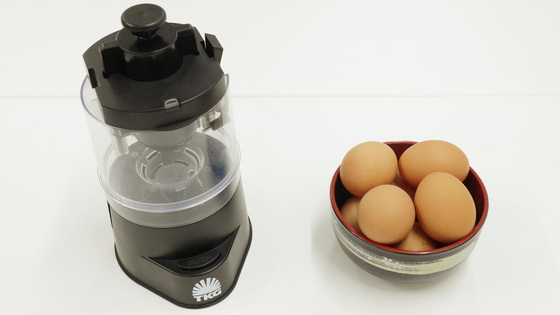 First, remove the upper lid, set the egg in the 'egg holder', then close the lid and lock it. Then I hit the chop button on the lid to break the shell, but if it is not locked properly after closing the lid, the egg holder will open, the power of the chop will escape and the egg will not break properly, so be careful .. 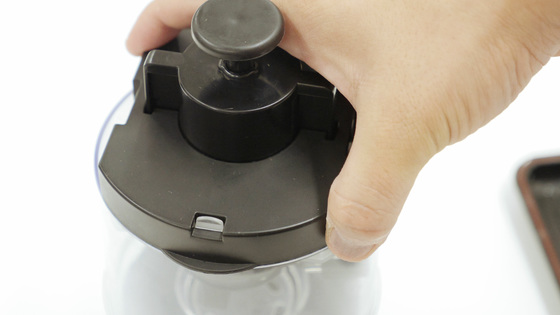 The power to hit the chop button is just as strong as when you hit the egg on the desk and break the shell. It's a little difficult to understand until you get used to it because you can't see where the shell is cracked, but the point is that it feels like it's sinking slightly. You can see how the contents of the egg fall into the filter by the 'egg breaking function' by watching the following video.


The filter catches the eggs, but the freshly laid eggs are too fresh and the white meat is so firm that separation does not proceed even if left as it is. However, if you turn on the switch and start stirring without worrying about it, the white meat will naturally fall down as if it were rolled up, as shown in the video below.


The instructions said that it took 1 to 3 minutes to stir the white meat to suit your taste, so when I tried to stir it in 3 minutes this time, the white meat became fluffy meringue. The official website said, 'Tamago kake gohan is going to the era of cloud computing,' but this is certainly the cloud.

After stirring the white meat for 3 minutes with Takara Tomy Arts 'Ultimate TKG', it became so fluffy-YouTube In addition, you can add yolk from above. This completes the 'ultimate egg-shaped rice'. The white part is solid white, so it looks more like 'fried egg rice' than 'fried egg rice'. Once you get used to it by learning how to adjust the force, it will be completed in about 5 minutes including the stirring time of the white meat. It's time to eat. I will gently break the yolk. If you put it on top of the rice as it is, you will stir it vigorously without thinking about anything, but in the 'ultimate egg-shaped rice', the yolk has a large presence, so you will want to gently break it. 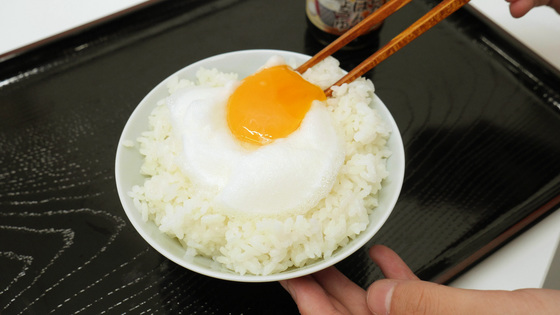 When I broke it all down, I ate soy sauce for tamago kake gohan. The soup stock of bonito and kelp is good, so the taste is deep. The white meat is foamy and mild, so it goes well with soy sauce and soup stock. When you eat a bite, the white part is whipped like meringue, so it is easy to mix well and evenly with the yolk, and the seasoning is even. It also has a mellow taste due to its plenty of air. The editorial staff who tasted it said, 'It's delicious without the peculiar discomfort that the white meat becomes slurping.' 'It feels like the white meat is mild and you are eating omelet rice properly.' In addition, I made an ingenuity recipe 'Egg in Cloud TKG' that was in the instruction manual. It's easy to make, just put the yolk on the whipped white meat and bake it in an oven toaster for 6-7 minutes so that it doesn't burn too much. When baked in an oven toaster for 7 minutes, the brown color was more like meringue sweets than fried eggs. The yolk also looks like it has a little water and is solidified. Place it on rice and sprinkle with soy sauce. When I put the egg on it, I thought it was the same as the fried egg bowl, but the white meat that is crispy on the outside and fluffy on the inside is a new sensation. Since it was baked in a meringue shape, it absorbs soy sauce like a sponge. 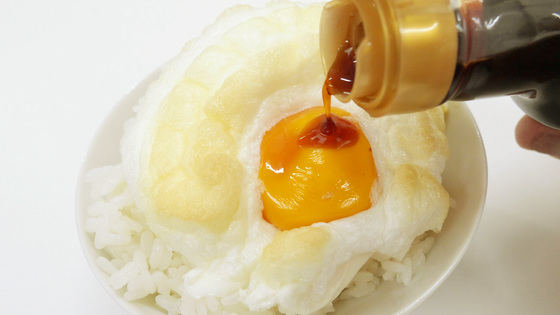 Especially since it was baked slowly in the oven, the yolks lost a moderate amount of water and became sticky, and the gap with the fluffy texture of the white meat was a fun dish. The 'ultimate TKG' allows you to easily enjoy fluffy white meat, but since it uses raw eggs, you must carefully clean it after using it. The mechanical box at the bottom uses batteries, so washing with water is strictly prohibited. Care After scraping with a brush, wipe it off with a wet tissue or moistened kitchen paper. In addition, there was a note in the instruction manual to clean the spring parts of the 'high-speed stirring function' as soon as they are used, because the white meat will harden if left unattended. The 'ultimate TKG' is a new fluffy tamago kake gohan that you can easily enjoy at home, but if you stir the white meat until it becomes meringue-like, the taste will be very mild, so not only omelet rice, but also sukiyaki, natto, and soba. There was also an opinion from the editorial staff who tasted it that it could be applied to other dishes and ingredients that use raw eggs. 'Ultimate TKG' will be available from Takara Tomy Arts on October 26, 2017, and the price is 3500 yen excluding tax.