What should I do or think about when I fail in job hunting? 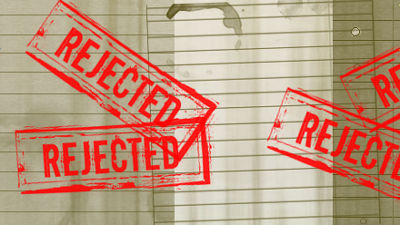 Job hunting and job hunting are more shocking when you receive a notice of rejection, and it is difficult to regain your feelings. The situation in Japan is particularly serious, and it is said that the number of young people who are sick and commit suicide because they cannot get a job is increasing. It is difficult to control your feelings when you get a job, but Karen X. Cheng shares his experiences with you about what kind of feelings you should have when you get a job.

How to get a job after you've been rejected | by Karen X. Cheng | Medium
https://medium.com/@karenxcheng/how-to-get-a-job-after-youve-been-rejected-ea649a85f041

Mr. Cheng says that the experience of 'failing in college entrance exams' is a great source of food for forming oneself today. When Cheng was a high school student, he used to look at his mailbox every day to see if he could get a pass notification from his target university after taking the university entrance exam. However, the contents of the envelope from the university was a notice of failure. She looked for a way to enroll in a college, but the college didn't have a vacancy pass system, and at first glance she didn't seem to have a way to appeal. However, Cheng, who really wanted to enter the university at the time, wrote a new resume and essay, and made a video to appeal himself. By sending them to the university, I succeeded in getting a successful notification. By failing to take the college entrance exam, Cheng says he learned the value of 'everything is negotiable and you can change people on your own.' If you really want to get a job, Cheng advises you to think hard about what you can do to get this job, based on your college entrance exam experience. Also, during job hunting, he was trying to think, 'When I receive a notice of rejection, I don't think negatively, and even if I can't get the target job, I'll do my best anyway.' “Failures are unacceptable and tend to be negative thoughts at times, but those who win a job make a lot of mistakes,” says Cheng. Cheng spent about 100 hours trying to get a job in Evernote, making an original resume with Evernote-style animals, singing while playing the guitar why he wanted to work there, and making an iPhone app , but still. I couldn't get a job. Cheng did his best, so a friend told her to give up working at Evernote, but he couldn't give up at that time.

However, she later discovered a job related to startups, spending 100 hours preparing for a job at that time, and got a job. 'I think it's good that Evernote didn't hire me, because in a big company like Evernote, the work is basically a division of labor, but I specialize within the company. I want to do various jobs, not something that has been transformed, so my boss who gives me freedom in my current workplace and work where I can do various jobs is perfect for my skills and personality. ' It looks like it is. 'Working in the job you admire may not be important in your life,' says Cheng. 'You're just an outsider of the job you're longing for, and you don't know in detail what the company does every day. If you're denied joining, it's best for you. Just think about it, because you have the opportunity to show off your talent to other companies, 'concludes the blog. Job hunting makes me feel denied and I get tired because I have a lot of trouble, but there is a reason for hiring and there is a reason for not hiring, so it does not become negative and it is more than necessary. It seems important not to be depressed.