One in four women answered that they can go out with no bra, and Wacoal asked 10,000 people about the bust awareness survey. Wacoal has conducted a ' Awareness Survey on Bra Selection and Bust Care ' for about 10,000 women aged 25 to 54 nationwide, and the results are summarized and released as materials.

Among them, '1 in 4 women answered that they can go out with no bra' 'People with smaller cup sizes tend not to try on and measure' 'Pose to train the pectoralis major is effective for bust care There are various unexpected facts such as 'There is no'.

From the following, you can choose underwear that is not known correctly and bust care that has many mistakes.

Only 16.3% of the respondents answered 'Nothing in particular' to the question 'When you wear a brassiere' or 'While you are wearing it', and 83.7% of the respondents said something when wearing a brassiere. I found that I was feeling a problem. Specifically, the most respondents answered that 'the shoulder straps will fall (23.3%)', followed by 'the brassiere shifts while moving (10.5%)' and 'the cup floats or flutters (23.3%)'. 6.8%) ”and other answers were seen. 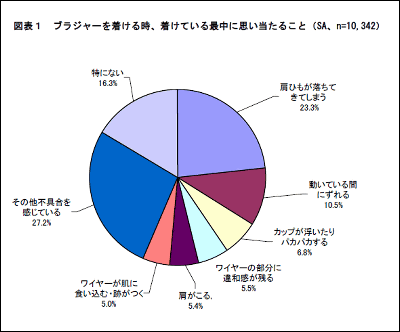 While many people are dissatisfied with the feeling of using a brassiere, only 13.8% of people usually buy a brassiere by both measuring the bust and trying on the brassiere. 9.1% of the respondents only measured and 19.0% only tried on, indicating that more than half of the women did not measure or try on. 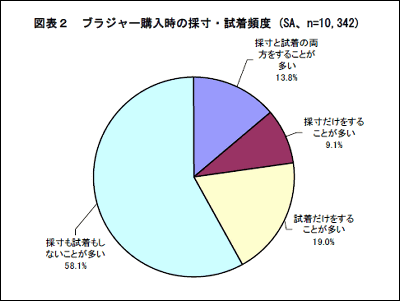 The most common reason for not measuring or trying on was 'because it is troublesome (37.2%)'. The next most common answer was 'Other'. Is there a wide variety of reasons for not trying on? 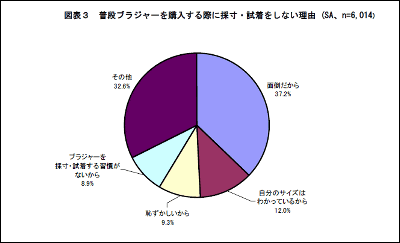 When asked 'Do you think the brassiere you normally use fits your bust?', 44.1% of the respondents answered 'It fits your bust (just fits)'. I stayed at.

Furthermore, when comparing people who usually measure and try on and those who do not, about twice as many people who usually measure and try on are 'fitting the bust' as those who do neither. Answer. Also, when I asked him what he noticed by wearing a bra that suits him after measuring and trying on it, he said, 'The bust line looks beautiful,' 'It wasn't painful to wear, and it was easy.' 'The size was different depending on the design.' It seems that there were many answers such as.

When we investigated whether there was a difference in awareness and behavior when purchasing a brassiere depending on the cup size of the brassiere that we usually wear, only 3.5% of AA & A cup women measured and tried on when purchasing a brassiere. It was found that the ratio of 'measuring / fitting' increases as the cup size increases, which is the lowest ratio among the sizes.

In response to this result, Professor Emeritus Haruko Makabe of Kyoritsu Women's University said, 'If the cup size is large, the shaking when moving is large, the influence of gravity is large and it is easy to hang down, it resonates with the outer garment, and the silhouette of the body is not aligned. It seems that it is highly related to such things (the ratio of measuring and trying on is high). However, the aging phenomenon will surely progress even for people with small cup sizes. Regardless of the cup size, choosing a brassiere It's important. ' When asked why the bust changes (hangs down), 48.2% of the respondents answered that they were 'aging', followed by 'breastfeeding children (21.7%)' and 'weight gain / loss (11.6%)'. ) ”Continued. However, 43.1% of the respondents said they had never taken care to maintain the shape of their bust.

It seems that the bust of Japanese women changes through the steps of 'swinging', 'deflection', and 'flowing' due to the shaking of the bust and changes in female hormones, but many people are aging. It seems that few people actually practice care even if they are aware of the accompanying changes in bust. When I asked women who had experience in bust care about the specific care methods they had taken to maintain the shape of their bust, the top item was 'Wear a bra that suits your bust (24.1%). ) ”“ Make a pose to train the pectoralis major (21.5%) ”“ Keep in mind the correct posture (20.6%) ”.

'Pectoralis major muscle training pose' is a generally known method of bust-up, but since bust is a tissue without muscles, it does not seem to be very effective as bust care. In addition, there are many mysterious methods such as 'eating chicken skin', 'shaking a net by collecting insects and playing in the river', and 'handstand', which were mentioned in the minority opinion, and bust care may be practiced with various 'beliefs'. not.

On the other hand, the number of people who take the care method of 'wearing a bra that suits your bust', which is the only and largest bust care recommended by Wacoal, is very few, 1 in 4 people who have experience in bust care. Wacoal says that this has highlighted the fact that the need for bras has not penetrated. 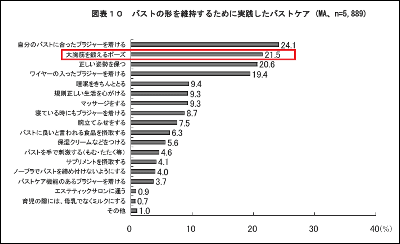 Also, when comparing consciousness according to the cup size of the brassiere that I usually wear, although the ratio of AA & A cups is the highest, 20% or more of people with E, F cups or more can go out with no bra. I answered, and there was no big difference in the size of the bust.

It is thought that one of the causes of the change in the bust is that the tissue called the Cooper's ligament that supports the bust grows under the influence of the shaking of the bust for a long period of time. The tendency revealed by this survey is that it is almost the same as the results of a survey conducted by Professor Emeritus Haruko Makabe on young adult girls (18 to 25 years old) 30 years ago. Points out that the relationship between women and bras has not changed essentially since decades ago. We want many women to rethink their beliefs about bra selection and bust care, to know the comfort of a bra that fits their body, which is constantly changing with age, and for underwear makers to make further efforts. It concludes with.

By the way, as an answer to a question that is a little different from the topics such as bust care summarized this time, 'One in two people owns a' game bra ', and the color of the game underwear is' pink 'in all generations. It means that it was.