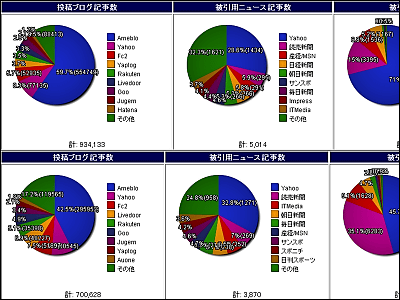 Regretfully blog ranking service Technorati Japan closed on Oct. 23 to show "the end of the beginning" of Japanese blogsphere.

Youtube took the most share by 71.0%, which shows the fact that the site has become the standard for most people. Famous NicoNico Douga has only 1536 cited videos, which shows negative effect of their "enclosuring" like registration system and difficult-to-embed flash video players.

As you can see in closure of Geocities, a great free web hosting service from early days, the process of selection is making a drastic change in web industry recently.

The web is gradually becoming a place not only for forerunners but also for "everybody". More services currently only for the real world will be adapted to the Internet and you will have to spend more time using the Internet.

You would not be able to see clear indications of the change, but slowly the Internet is changing, whether someone likes or not.