Another Bandai Namco's "New RPG" coming for PS3, with no names shown 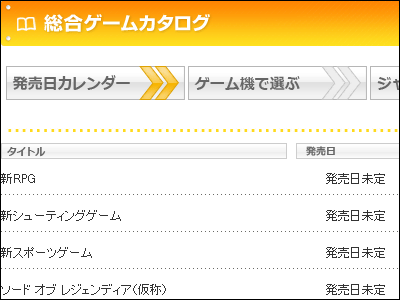 While Bandai Namco has announced the PS3 adaption of famous XBOX360 RPG "Tales of Vesperia", we came to know that the company is quietly developing another "New RPG" for PS3 console. They are also on a "New Shooter Game" and a "New Sports Game".

According to the product catalog on Bandai Namco's website, they are now developing three softwares such as "RPG", "Shooter Game" and "Sports Game" as of April 7. No release dates and prices were indicated yet.

First we thought that the "New RPG" stands for "Tales of Vesperia" but the indication is still left "New RPG" even after they have added "Tales" to the list, which means "New RPG" must be something other than "Tales".

Bandai Namco has "Xeno Saga" series and ".hack" series for their RPG lineup. Maybe "New RPG" has something to do with these famous RPG series while there's some probability of brand new RPG, like "Eternal Sonata" series.

To make the thing clear, we phoned Bandai Namco Games to confirm what this "New RPG" means. They avoided direct answers like "Yes" or "No" and told us "It's rather hard to answer the question". At least, it's not the kind of miss printing. Very interesting, isn't it?

Related Post:
tri-Ace starts a count down for their “New RPG” release - GIGAZINE

RPG “Tales of Vesperia” to be adapted to anime movie - GIGAZINE

“Tales of Vesperia” ported to PS3 with a New Character, and a Movie Adaption officially announced - GIGAZINE