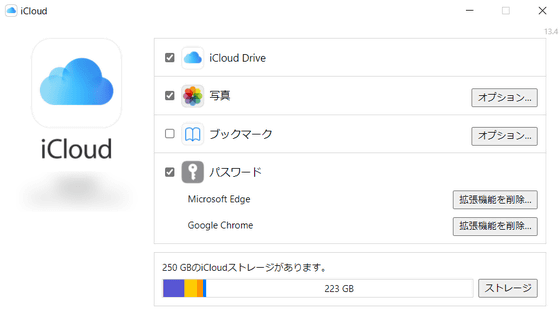 On the user forum of Apple-related news site MacRumor, users using iPhone 13 Pro and iPhone 14 Pro reported that movies synchronized with iCloud for Windows, the Windows version of iCloud, were corrupted, and sometimes family photos of strangers. And there are reports that children's photos were displayed.

The user who first posted on the MacRumor forum said that he tested movie synchronization using multiple devices such as iPhone 11 Pro and iPad with two Windows 11 Pro PCs and one Windows 10 Pro PC. As a result, when a movie shot on an iPhone 14 Pro Max with HDR and HEVC enabled was downloaded through iCloud for Windows and File Explorer, the movie footage was corrupted and displayed like scanning lines on a black screen. that's right.

Also, instead of corrupting the video and displaying a black screen, it seems that there were times when family photos of people who had never met or photos of soccer games were displayed. A picture of a soccer match displayed in the actual corrupted movie below. A user wrote on the forum that ``I have the same experience'', and reported that ``This happened even in movies shot with iPhone 13 Pro'' and ``File metadata on NTFS is corrupted''. I'm here.

Apple-related news site 9To5Mac says, ``It seems that a bug occurs when certain file types are passed between iPhone and iCloud rendering on Windows. There seems to be a reason.' I guessed.

In addition, the user who discovered this problem on MacRumor's user forum said that it had already been reported to Apple at the time of writing the article, saying, ``It seems to be a serious violation that cannot be overlooked in terms of security.''