In the Great Salt Lake Desert in Utah, USA, a mysterious footprint 'ghost track' that can only be seen after it rains has been discovered. It is believed to have been left behind by humans at least 12,000 years ago.

'Ghost tracks' are mysterious footprints that absorb moisture and darken when it rains, and fade when dry, making them indistinguishable from the surrounding scenery. 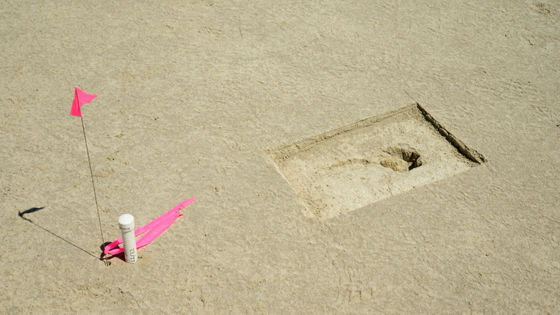 The ghostly footprints are said to have been made by humans at least 12,000 years ago, when the surrounding area was still a vast swamp. The Great Salt Lake Desert was once covered with a large salt lake similar to the famous salt lake 'Great Salt Lake'. The lake gradually dried up from the end of the ice age, but it temporarily became a large wetland on the way, and it is believed that humans settled there at that time.

Archaeologist Daron Duke said, 'Ancient people seem to have walked in shallow water, leaving footprints in the mud, which were held in place by the sand flowing over them. I will.” Also, since there were no wetlands that could create such footprints for at least the past 10,000 years, it is thought that it will be more than 12,000 years old.

Also, a camp of hunter-gatherers 12,000 years ago was discovered less than 1 mile (about 1.6 km) from where the footprints were discovered, and it is possible that humans who left footprints lived there. It seems that there is a nature Researchers said that they collected some of the footprints so that they could investigate the deposited organic matter. Anya Kitterman, who supervised the archaeological work, said, 'It's a once-in-a-lifetime discovery,' and was pleased with this discovery.