It is possible that human beings 1.7 million years ago boiled and ate food at 'hot springs' 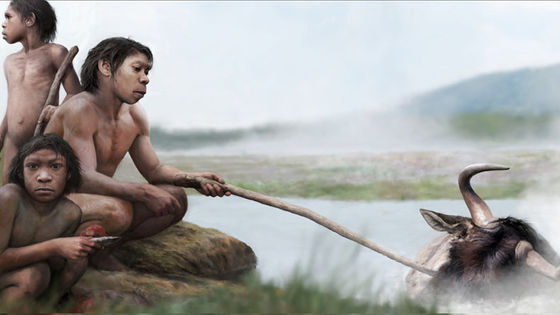 Oldupai Gorge in East Africa, known for its traces of the oldest tooling in human history. From this finding, which shows that humans settled near hot springs, experts point out that 'humans may have boiled and ate food in hot springs before they started using fire.' ..

Did our early ancestors boil their food in hot springs?
https://phys.org/news/2020-09-early-ancestors-food-hot.html

A research team led by Ainara Sistiaga, a researcher at the Massachusetts Institute of Technology Cambridge, found that ancient humans lived near hot springs. Sistiaga, who participated in an archaeological survey conducted in the Oldupai Gorge in Tanzania in 2016, said that the composition of sand collected from the 1.7 million-year-old formation is significantly different from the 1.8 million-year-old formation beneath it. I found. Since East Africa was said to have been gradually desertifying 1.7 million years ago, Sistiaga initially thought that the difference in sand composition was due to changes in vegetation. That thing. Therefore, Sistiaga sought to analyze the samples brought back from the Oldupai Gorge to detect plant-derived lipids and determine the type of plant at the time. However, what was found in the sample was a lipid unrelated to plants.

So, when Sistiaga asked co-author Roger Summons to analyze the data, Summons synthesized the lipid in question by a thermophilic bacterium called

Thermocrinis ruber, which was found in Yellowstone National Park , USA. I found out that it is the same as lipid. Summons said, 'Thermocrinis ruber cannot grow unless the temperature exceeds 80 degrees Celsius. The finding of lipids produced by these bacteria in samples of the Oldupai Gorge means that the Oldupai Gorge at that time was hot. It seems to be a clear indication that there was water. '

In addition, the location where Sistiaga took the sample was adjacent to the location where early human life traces such as stone tools and animal bones were found, so researchers said, 'In the Oldupai Gorge 1.7 million years ago. There was a hot spring, and human beings settled in the immediate vicinity. '

'We can prove that the hot springs may have existed near the ruins of humankind, but there is no evidence that humans were involved in the hot springs, probably 1.7 million years ago,' said Sistiaga. It will be very difficult to know the behavior of the species that have been erased. ' On top of that, he said, 'If ancient humans find a beast that has fallen into hot water and boiled, I don't think they will eat it.' It is possible that humans were cooking food in hot springs. Showed the view that is expensive.

The research team plans to conduct further research in the Oldupai Gorge to look for signs of the presence of similar lipids and hot springs found this time.