In addition to MindGeek, the plaintiffs also accused payment provider Visa of violating California law by processing payments for child pornography. In response, Visa claimed that they could not control MindGeek's content and would not be legitimate defendants, and sought to exclude it from the lawsuit.

However, on July 29, Judge Cormac Carney of the United States District Court for the Central District of California ruled that it was reasonable for the plaintiffs to claim that 'Visa intentionally assisted MindGeek in its criminal activities.' Did. This allowed the lawsuit to proceed with Visa as the defendant.

``(Visa) was aware that MindGeek monetized a significant amount of child pornography on its website,'' Carney said in the document. Instead, they were alleged to have deliberately provided the tools to complete their crimes.' In other words, in the plaintiff's allegation that 'MindGeek committed a crime of profiting from child pornography,' it is reasoned that Visa, which processed the payment, 'intentionally provided a tool to complete the crime.' I am thinking that it is possible.

In a statement to foreign media Variety, Visa said, ``Visa condemns sexual trafficking, sexual exploitation, and child sexual abuse content as being contrary to its corporate values and purpose. We are disappointed that the pretrial ruling misrepresents Visa's role, policies and practices, and we continue to believe that Visa is an improper defendant in this case.' and commented.

MindGeek pointed out that this ruling was only made at the stage of sorting out the validity of Visa as a defendant in the lawsuit, and that the court has not yet made a judgment on the content of the lawsuit. “We are confident that if the court actually considers the facts, plaintiffs' claims will be dismissed as frivolous. We have enacted the most comprehensive safeguards in the history of the platform that we use,' he said, and at the time of writing the article, he said that he was working to eliminate illegal content by checking ID cards and strengthening moderation tools. claimed.

In recent years, the regulation of online pornography platforms by credit card companies has been viewed as a problem . In Japan, in July 2022, DMM, which operates the major adult content platform FANZA, announced that it would terminate the payment contract with Mastercard, which attracted a lot of attention.

Mastercard will not be available on DMM from July 29, 2022-GIGAZINE 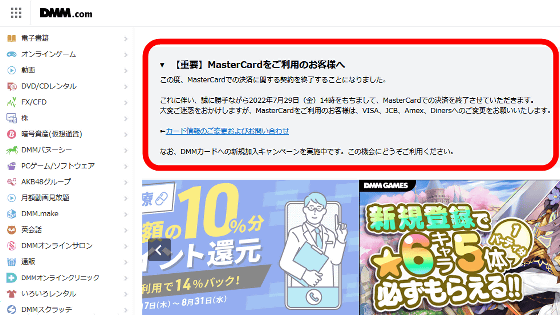