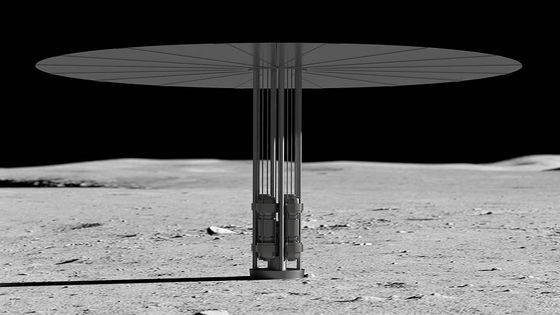 NASA, which is promoting the next manned lunar landing '

Artemis Program ', has signed a private contract for the design of a nuclear power generation system that operates on the moon.

NASA and the US Department of Energy (DOE) are working together to advance space nuclear technology, and have newly adopted three proposed concepts for research through DOE's Idaho National Laboratory. Lockheed Martin , Westinghouse Electric , Intuitive Machines and X-Energy joint venture IX will each sign a 12-month contract to develop a preliminary design for a nuclear power generation system.

The 'fission power generation system' promoted by NASA and DOE is relatively small, lightweight and highly reliable compared to other power generation systems, and continuously supplies power regardless of the construction site and natural environmental conditions such as sunlight. There is a possibility that it can be supplied. When completed, it will be able to supply enough electricity to maintain at least 30 households for 10 years. NASA and DOE conducted experiments in 2018 demonstrating heat transfer technology using highly enriched uranium fuel, and it has been shown that it operates normally under expected conditions, and research will proceed in collaboration with each company. It is expected that this will open up even more possibilities.

'New technologies are driving exploration of the Moon, Mars, and beyond. Developing these initial designs is another world,' said Jim Reuters, Deputy Chief Cabinet Secretary of Space Technology Missions at NASA. It will help lay the foundation for supporting the long-term existence of humankind. '