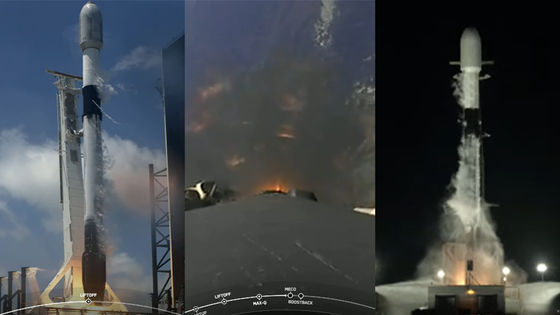 Elon Musk's private space development company, SpaceX , has successfully launched its own rocket ' Falcon 9 ' three times in 36 hours. SpaceX emphasizes that it will continue to launch more frequently in 2022 than ever before.

If things go well, Falcon will launch about once a week on average in 2022, delivering ~ 2/3 of all Earth payload to orbit

To reach the launch target, SpaceX attempted six launches in 69 hours at the end of 2021 and succeeded in three, and two months later, in February 2022, all three Falcon launch pads in 67 hours. We have succeeded in launching a rocket from. From there, we completed the 26th launch in 2022 alone on June 19th to turn the launch plan further. It has shown a pace that exceeds the goal of 'launching once a week', which is 32 launches in 7 months counting from November 2021.

SpaceX took off Falcon 9 from the NASA Kennedy Space Center Space Shuttle Launch Pad LC-39 at 12:09 pm on June 17, 2022, carrying 53 Starlink satellites. You can see the live video of launching a rocket loaded with Starlink satellites in the following movie.


Twenty-two hours later, at 7:19 am on June 18, a rocket carrying the reconnaissance satellite 'SARah-1' for Germany was launched from Vandenberg Air Force Base in California.


SpaceX continues to plan launches on June 25th and 28th, and if successful, it will have 28 successful orbital launches in the first half of 2022 alone. Maintaining this pace is equivalent to 68 launches per year, surpassing the record that one rocket-related organization has never successfully launched more than 61 launches per year in the history of space exploration.