' Imagen ', an AI model that can naturally generate high-resolution images even from outlandish text, has been announced. It seems that increasing the size of the language model will greatly improve both the fidelity of the sample and the integrity of the image and the text. What kind of image can actually be generated from what kind of text Imagen is as follows.

'A raccoon wearing an astronaut's helmet looks at the night view from the window.' 'Corgi in the sushi house' In addition, there is also an area on Imagen's official page where you can change the generated image by clicking the condition.

Fréchet Inception Distance (FID), an indicator that evaluates the quality of images generated by GAN, is a trained on COCO trained with COCO in an image dataset and images without COCO for training. The following figures compare the scores of the generative model (Not trained on COCO). The lower the FID, the higher the quality of the generated image, and Imagen has the highest score of '7.27'. 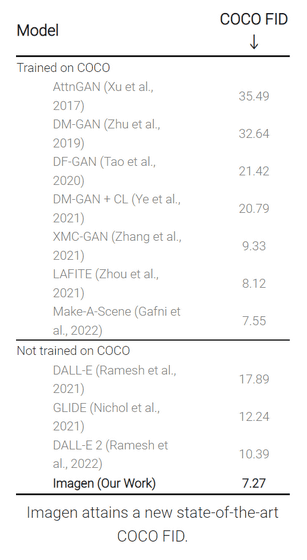 In addition, using 'DrawBench', a benchmark using a human evaluator to evaluate the accuracy of the model that converts text to images, Imagen and VQ-GAN + CLIP, Latent Diffusion Models (LDM),

DALL-E 2 The graph below compares the three models. The scores are divided into 'Alignment' and 'Fidelity', with Imagen winning all models on either scale. 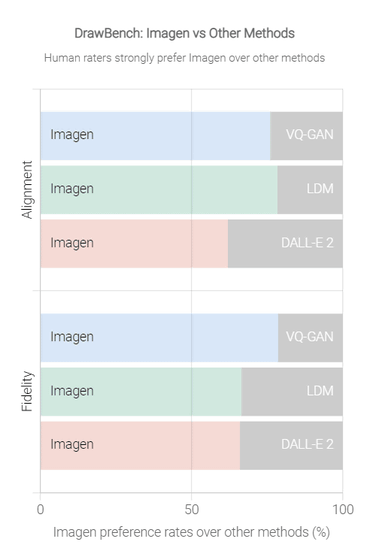 A research paper on Imagen has also been published and can be checked from the following.