NASA will hold a contest on the theme of scenario construction of 'Mars XR Operations Support System', an environmental simulator on Mars. The total prize money is 70,000 dollars (about 9 million yen). 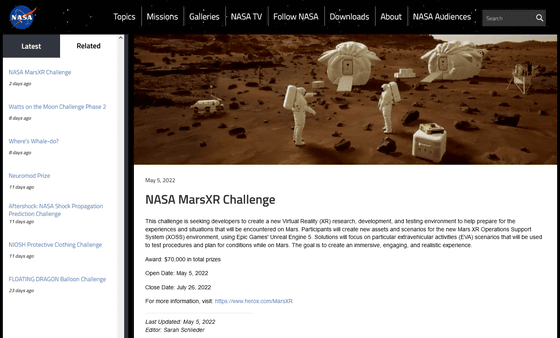 'Mars XR Operations Support System' is a virtual environment simulator on Mars jointly developed by NASA with Buendea using Unreal Engine 5 of Epic Games, which was officially released in April 2022.

However, it is said that it is in a state of 'just having a simulator', so a contest will be held aiming to build an extravehicular activity scenario that may be encountered on Mars. ..

The contest is divided into five categories: 'base construction,' 'scientific research,' 'maintenance (base operation),' 'exploration,' and 'things that overwhelm us (freedom).' There are four awards for each category, and the best performers in each category will receive $ 6,000 (about 780,000 yen).

Anyone over the age of 18 is OK to participate.

The editors needed to build the scenario are available at the Epic Games Store.