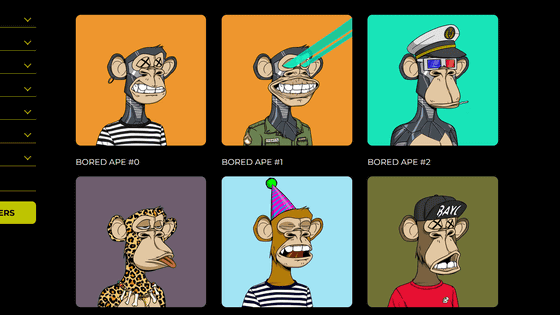 The official Instagram account of Bored Ape Yacht Club (BAYC) , which sells non-fungible tokens (NFT) for monkey icons, was hacked and a total of $ 2.8 million worth of NFT was stolen. Was announced.

This morning, the official BAYC Instagram account was hacked. The hacker posted a fraudulent link to a copycat of the BAYC website with a fake Airdrop, where users were prompted to sign a'safeTransferFrom' transaction. This transferred their assets to the scammer's wallet.

The damage caused by this scam has not been officially tabulated at the time of reporting, but from the records left at the Ethereum address used by hackers , at least 4 types of Bored Ape series, 6 types of Mutant Ape series, Bored In addition to the 3 types of Ape Kennel Club series, it has been confirmed that items of popular NFT series such as CloneX, EightBit, Alien Fren, Toxic Skull Club have been stolen, and the total damage is estimated from 91 NFTs, the lowest winning bid. The total damage is estimated to be 2.8 million dollars (about 350 million yen).

???? There is no mint going on today. It looks like BAYC Instagram was hacked. Do not mint anything, click links, or link your wallet to anything.

BAYC had just been hacked on the Discord server on April 1, 2022.