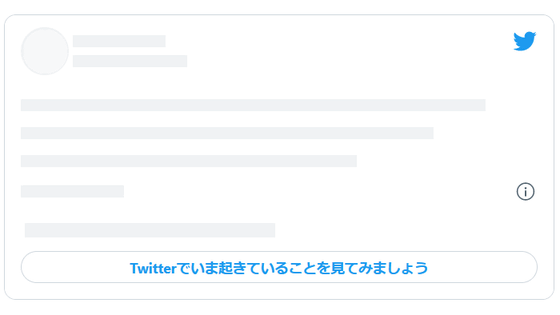 we are working on an edit button

The embed code is as follows.
[code]

we are working on an edit button

The embed code 'widgets.js' script searches for the blockquote tag and replaces 'class =' twitter-tweet '' with a Twitter-specific iframe to display it like a real tweet.

Until recently, if the original tweet was deleted or the tweeter's account was deleted, Twitter left the blockquote tag as it was, so it was displayed in the same way as 'Tweet without script' above. ..

In response to the question 'How will the embedded tweet be displayed if the tweet is deleted?', Ben Ward, who created the Twitter embed code, said, 'The embed code is a blockquote tag that contains the content of the tweet. If the original tweet is deleted, the text will remain even after 1000 years. '

@arielwaldman The embed code is a <blockquote> containing the Tweet content. If it's deleted, or 1000 years in the future, the text remains.

Then, on Twitter's developer platform, the question 'What happens if the original tweet is deleted?' Is asked, 'Twitter widget JavaScript is fully rendered when the tweet no longer exists on Twitter. I don't see the tweets I've received. Alternate citations containing tweet information are displayed on the page. '

When Kevin Marks contacted Twitter about the change, Twitter's Eleanor Harding said, 'The reason we changed the specification is to more respect people's choice to delete tweets.' I'm tweeting.

Here's an old example post of mine. Notice how the 2 deleted tweets are blank, making nonsense of the narrative: https://t.co/6exFMCeS0Y
It first looked like this, then showed deleted ones as HTML, now it's blobs. Pic.twitter.com/eYw1hx5jYk