GIF animation shooting &amp; posting function appeared on Twitter for iOS, the actual usage is like this 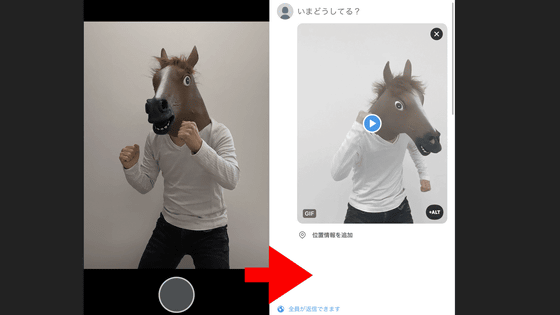 On March 22, 2022, Twitter announced that it has added 'a function to shoot GIF animation and tweet immediately' to the iOS version application. Posting GIF animation has been supported on Twitter so far, but this new function is a function that allows you to instantly create a GIF animation from the video taken from the in-app camera and tweet it, so actually use it Saw.

Ok GIFs aren't new but what * is new * is the option to capture your own using the in-app camera on iOS.

So, let's actually try out the new features added to Twitter's iOS app. First, start the app and tap the icon to post a new tweet at the bottom right.

Then, it shifts to the camera mode as shown below, so if you press and hold the shooting button after confirming that the notation at the bottom of the screen is 'GIF image' ...

It shoots a movie, automatically converts it to a GIF image, and then saves it. Tap 'Use GIF image' to tweet the completed GIF image.

Then, the completed GIF image will be automatically pasted in the tweet posting field.

When I actually use it, the video that can be shot is about 1 second, so the impression is that it is a function that allows you to shoot a 'short movie' quickly and post it in GIF format.

The created GIF image is displayed in the 'Library' of the 'Photos' app and in the 'Animation' item in the 'Album' tab, so you can delete it from here.