Approximately 590,000 lightning strikes have been confirmed in a huge eruption that blows away the island of Tonga Hunga Tonga-Hunga Haapai volcano in Tonga on January 15, 2022 was more than 500 times more powerful than the Hiroshima-type atomic bomb, and was large enough to almost completely blow away the island. .. It is reported that the eruption caused more than 590,000 lightning strikes.

Analysing the volcanic lightning from the Tonga eruption
https://graphics.reuters.com/TONGA-VOLCANO/LIGHTNING/zgpomjdbypd/index.html

How big was the volcanic eruption in Tonga? When the scale of the explosion is piled up all over the world, it looks like this --GIGAZINE According to NASA, the altitude of the eruption generated by the first explosion was up to 58km, reaching the mesosphere . After that, it seems that volcanic ash, volcanic gas, and water vapor were blown up to more than 50km by the secondary blast from the volcano. And the stratosphere below the mesosphere was filled with the gas and ash that was blown up and spread to an area of 157,000 square kilometers.

If you click on the image below, you can see in a GIF animation how the eruption of Hunga Tonga-Hunga Haapai volcano erupts to a tremendous height and spreads in a blink of an eye. 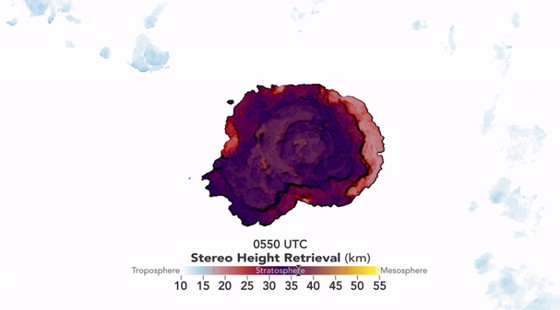 Chris Vagasky, a meteorologist at Vaisala, a Finnish environmental technology company, said, 'When a lightning strike hits the stratosphere and spreads, it looks like a wave has generated in the atmosphere.' It suggested that the waves may have influenced the pattern of lightning strikes.

According to data from the lightning detection network 'GLD360' operated by Vaisala, about 590,000 lightning strikes occurred during the eruption of Hunga Tonga-Hunga Haapai volcano, of which 400,000 were within 6 hours of the big explosion. It happened. It was also confirmed that 56% of the lightning strikes reached land or sea level, and more than 1,300 times fell on Tongatapu Island , the main island of Tonga. So far, the number of lightning strikes by volcanoes has been estimated to be about 340,000 in the large eruption of Anak Krakatau Island in Indonesia in 2018. 'It's usually unthinkable that nearly 400,000 lightning strikes will be detected in just a few hours,' said Vagasky.

The principle of lightning generation has not been completely elucidated, but it is thought to be generated by static electricity caused by the collision of particles existing in the atmosphere. For example, in a cloud floating in the sky, ice particles collide with each other, and some of them have a positive charge and others have a negative charge. When the number of positively charged particles and negatively charged particles increase and the charge is sufficiently accumulated, it is discharged in the form of lightning.

There are two types of lightning generated by volcanic eruptions. The first is lightning, which is created by the charging of fine particles of ash and rock that erupt into the sky, and this lightning is caused by 'dry charging,' which is charged without moisture. The other is lightning produced by ice particles formed by freezing volcanic eruptions. In this eruption of Hunga Tonga-Hunga Haapai volcano, it is probable that this second lightning occurred a lot because the water vapor explosion also swirled the water required for ice formation into the sky at the same time.

However, according to Vagasky, the reason why the eruption of Hunga Tonga-Hunga Haapai volcano caused such a large amount of lightning has not yet been completely clarified. 'Scientists have already seen the eruption of Hunga Tonga-Hunga Haapai volcano on such a large scale, from the scale of the explosion to the amount of shock waves, pressure waves, tsunamis and lightning that ran around the world. I'm trying to figure out what caused it. '