DuckDuckGo lowers the rank of sites related to Russian disinformation, but some users repel it when it violates 'unbiased search results' 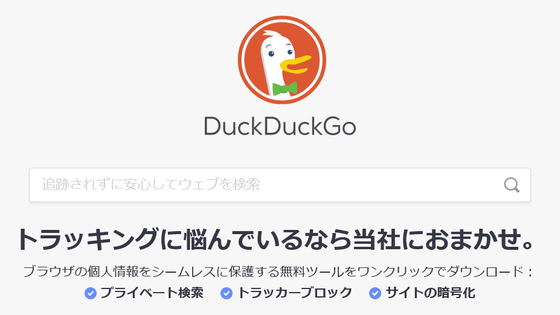 Gabriel Weinberg, CEO of DuckDuckGo , an internet search engine focused on protecting user privacy, revealed on Twitter that DuckDuckGo's search algorithm has been updated to lower the rank of sites related to Russian disinformation. did. However, some users have criticized that 'this measure is equivalent to censorship.'

CEO Weinberg said on March 10, 2022, 'Like many others, I'm tired of Russia's invasion of Ukraine and the consequent crimes against humanity. We are rolling out search updates that will lower the rank of the site. '

Like so many others I am sickened by Russia's invasion of Ukraine and the gigantic humanitarian crisis it continues to create. #StandWithUkraine️

At DuckDuckGo, we've been rolling out search updates that down-rank sites associated with Russian disinformation.

In addition, CEO Weinberg said, 'We often place news modules and information boxes at the top of DuckDuckGo's search results to emphasize quality information about the topic of interest.' 'DuckDuckGo's mission is for everyone. Make it easy to protect your privacy. Privacy is a human right and transcends politics. That's why about 100 million people around the world use DuckDuckGo (not tracked, so accurate). The number of users is unknown) '.

DuckDuckGo's mission is to make simple privacy protection accessible to all. Privacy is a human right and transcends politics, which is why about 100 million people around the world use DuckDuckGo. .)

Since Russia declared the invasion of Ukraine on February 24, 2022, Twitter , Google , YouTube and Facebook have shown a move to eliminate media closely related to the Russian government in order to prevent the spread of disinformation. Therefore, it can be said that DuckDuckGo's measures are in line with this movement. However, on Twitter, 'Given the measures taken by DuckDuckGo this time, what exactly is' unbiased search results '?'

So what do you mean by 'unbiased result' in this tweet? Https://t.co/KmEcVCYMwZ

In particular, DuckDuckGo has posted a tweet in the past appealing to stop using Google, saying that 'Google's search results are biased', so there are criticisms that DuckDuckGo's attitude is a double standard.

“[W] hen you search, you expectably results, but that's not what you get on Google,” @matthewde_silva quotes @yegg .

You can revoke Google's access to search & location histories, but the only true way to protect yourself is to leave Google. Https://t.co/CMSovx6KYk

'That means DuckDuckGo is censoring users? Does DuckDuckGo determine what is disinformation and what is true? That decision should be in the hands of the user.'

So you are censoring your users? DDG now decides what is or isn't misinformation? This decision should be left to the user

'Does DuckDuckGo have a magical'disinformation finder'? Are you sure you can only rank down sites that spread the wrong information? I think it's going to work. And I'm sure DuckDuckGo won't do this for anyone else in the future (laughs). '

You've got that magic 'disinformation finder' eh? You're just sure you're going to only downrank things that are wrong?

And I'm sure you won't use this against anyone else in the future.

PCMag, an IT news site, asked DuckDuckGo for comment, but it seems that there was no answer at the time of writing the article.