Some smokers may think that tobacco is a kind of communication tool, but a new study that followed people over the age of 50 for 12 years said, 'Smokers are nonsmokers.' It is more likely to be socially isolated and lonely than it is. '

Relationship of smoking with current and future social isolation and loneliness: 12-year follow-up of older adults in England --ScienceDirect 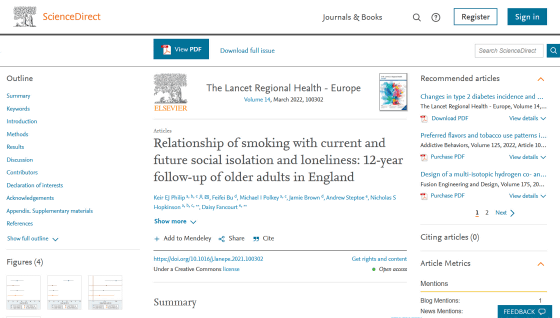 Analysis of the data revealed that smokers were more lonely and socially isolated than non-smokers from the start of the survey. Smokers had little social interaction with family and friends, had little involvement with local communities and cultural activities, and were more likely to live alone. Furthermore, it became clear that as time passed, smokers' social contact decreased and isolation deepened. These results remain even after considering factors such as age, gender, and socio-economic status.

'Our study suggests that smoking not only affects the body, but also the psychological and social health aspects,' said Dr. Keir Philip of Imperial College London, who led the study. 'Smokers think smoking is a social activity, but our study did not support this idea. Smokers are, in fact, more isolated than nonsmokers over time. And I became lonely. ' The results of this study are based on observations and do not prove a causal relationship that 'smoking makes you lonely.' However, the research team argues that there are multiple factors that make smokers more likely to be lonely than nonsmokers.

For example, smokers are at increased risk of having health problems such as shortness of breath and cardiopulmonary disease, which can limit their ability to socialize. Smoking is also associated with an increase in mental health problems such as anxiety and depression, which also adversely affect a person's sociability. In addition to this, smokers are more likely to have friends with the same smoker, but smokers are at increased risk of premature death from a variety of illnesses, so their friends are more likely to die prematurely and become isolated. It will be.

In recent years, the movement to regulate tobacco has become stronger worldwide, and New Zealand is already planning to gradually raise the age at which tobacco can be purchased

and quit smoking for the entire population in the future, and the United Kingdom will also be a nation by 2030. We are advocating 'Smokefree 2030' aiming to quit smoking as a whole. 'The findings are one of the reasons why the government is urging the government to implement policies to achieve its 2030 smoking cessation ambitions,' said Nicholas Hopkinson , a professor at Imperial College London.