Meta is building the world's fastest AI supercomputer with 16,000 GPUs Meta , known as the operator of Facebook and Instagram and focusing on the Metaverse business, announced that it is building 'AI Research SuperCluster (RSC) ', which is the fastest AI supercomputer currently in operation. did. RSC is already in operation, but it is still under construction at the time of article creation, and when it is completely built in mid-2022, it is expected to become the 'world's fastest AI supercomputer' with 16,000 GPUs. ... apparently ... The development of AI (artificial intelligence) requires an 'AI supercomputer' specialized for computation, with a computing power of billions of times per second.

The RSC announced by Meta is being built for completion and is expected to become the world's fastest AI supercomputer when it becomes complete in mid-2022. Meta researchers have already begun learning large-scale models of natural language processing and computer vision using RSC, and plan to learn models with trillions of parameters in the future.

Since establishing the Facebook AI Research Lab in 2013, Meta (then Facebook) has made a long-term investment in AI, and in 2017 it was the first to have 22,000 NVIDIA V100 Tensor core GPUs. Build a generation of AI supercomputers. I ran 35,000 training jobs a day. 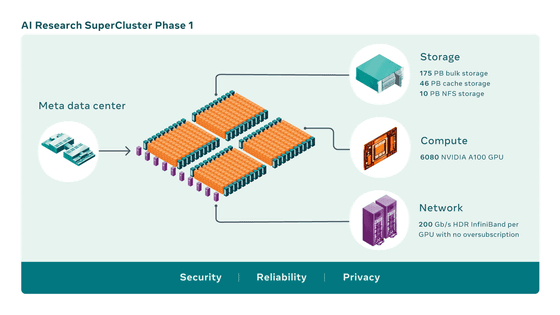 RSC can execute computer vision workflows up to 20 times faster than conventional machines equipped with V100. The NVIDIA Collective Communication Library also runs 9x faster and is capable of completing training for models with tens of billions of parameters in 3 weeks.