Phenomenon that cats gather at Starlink's parabolic antenna is confirmed 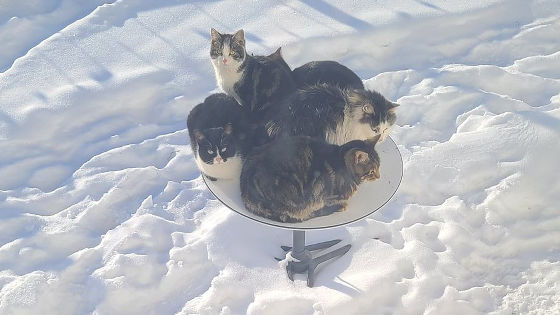 SpaceX, CEO of Elon Musk , offers 'Starlink' that enables satellite Internet access using a large number of artificial satellites. Starlink already has more than 140,000 customers in 20 countries around the world, but there are many technical issues, and it was reported that 'cats gather at the parabolic antenna' as one of them.

SpaceX provides space transportation business, including rocket development, as well as satellite Internet access. There are many places in the world where the Internet is not yet widespread, and even in the United States, the local Internet environment is said to be poor. Starlink, an Internet service that uses artificial satellites, has the potential to become an innovative service that can provide the Internet to the world, including such locations, but on the other hand, there are issues such as the fact that a dedicated antenna selects the installation location. It has also been pointed out that there are many .

Regarding Starlink's parabolic antenna, Aaron Taylor posted a situation on Twitter that can be said to be one issue. The tweet says, 'Starlink did a great job until the cat recognized the satellite dish as'it's warm here even on cold days.''

Starlink works great until the cats find out that the dish gives off a little heat on cold days. Pic.twitter.com/uyH3Kbqrie

In 2020, Starlink's satellite dish was introduced with 'Snow Melt Mode,' which prevents snow from accumulating and attenuating the signal. This is a function that the parabolic antenna detects the temperature and heats the terminal when necessary. Mr. Aaron seems to have a cat house with heating, but the cats decided to sit on the slightly heated Starlink antenna at -25 degrees Celsius.

When a person who actually has a Starlink parabolic antenna checked the temperature with a thermal camera, it was confirmed that it became warm not only on the top of the reflector but also on the back and below. For this reason, it is believed that animals may approach the area around Starlink's satellite dish.