9 games to play once you get the Nintendo Switch Supergiant Games is 'Hades', which has won numerous awards such as the Best Game Award in the game category of the British Academy Awards in 2020. As a title similar to Hades, The Verge cites The Binding of Isaac, a roguelike action game. About Hades, The Verge describes it as 'the most balanced roguelike game I've ever encountered, with the best music and lighting.'

Hades is also playing on GIGAZINE, and you can check the reviews below. The Nintendo Switch version of Hades is sold on Amazon.co.jp for 3300 yen. Wargroove is a turn-based strategy game released by London game publisher Chucklefish. The game screen has a lovely appearance expressed in pixel art, but it follows the advantages of traditional strategy games and adds its own fantasy elements. The combat style is very similar to Advance Wars , but with some unique elements such as hero units and special skills.

Wargroove is sold at the My Nintendo store for 2050 yen including tax. 'Subnautica' is an underwater survival game on an unknown ocean planet. You can swim in the oceans of the ocean planets and explore the mysterious world of coral reefs, deep-sea caves, seaweed forests, etc. It will be the purpose.

In addition, the sequel 'Subnautica: Below Zero' has also been released, and a set of the two is sold at Amazon.co.jp for 5890 yen. 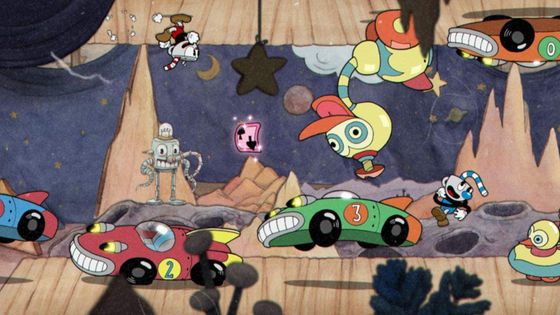 Cuphead is a 2D action shooter game released in September 2017 by Canadian indie game developer Studio MDHR. The biggest feature is that the style reminiscent

of the golden age of American animation in the 1930s, such as Mickey Mouse and Tom and Jerry, is often used throughout. It's a comedy-touch visual like an American children's anime, but the game is quite difficult and challenging.

The download version of Cuphead is sold on Amazon.co.jp for 1755 yen. 'Celeste' is a 2D action game where you use the three actions of 'jump', 'air dash', and 'climb' to advance through the stage while avoiding enemy attacks and damaged terrain such as needles. It is a work that is particular about action, and you can see where the developer Maddy Thorson was particular about the action element of Celeste by reading the following article. The download version of Celeste is sold on Amazon.co.jp for 1926 yen. The 'Diablo III Eternal Collection' is a collection of the 'Diablo III' released in 2012 and its expansion packs 'Reaper of Souls' and 'Rise of the Necromancer'. The Nintendo Switch version of the Eternal Collection includes characters and elements from The Legend of Zelda series, including pet Kokko, Triforce portrait frames, and Ganondorf's armor that allows you to change the appearance of your character. .. Multiplayer is possible not only for network communication but also for local communication, and The Verge wrote, 'The Nintendo Switch can be taken anywhere, so it is the best way to play Diablo III.' 'Void Bastards' is a shooting game where you get on a drifting ship and escape the 'Void Busters', a collection of junk humans. Search for supplies on a dangerous ship, and fight while making your own tools and weapons from the acquired supplies. Even if the prisoner operated by the player dies, another prisoner can take over the battle, and all the tools collected so far can be taken over.

Void Bastards are sold at the My Nintendo Store for 1545 yen including tax. 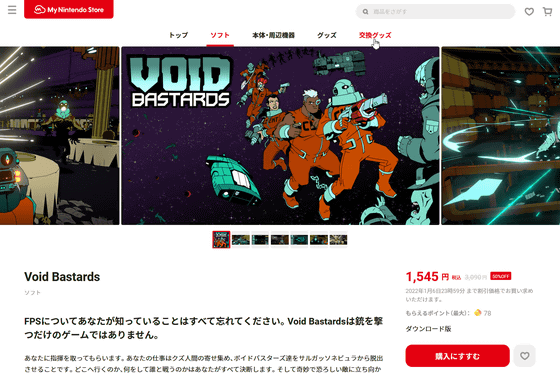 The deck-building roguelike game 'Griftland' is a work that explores the world while making full use of negotiations as well as battles. 'If you want to enjoy a card game that you can collect without paying, you definitely have to check out Griftland,' said The Verge. It's also packed with quests and random events, so you can enjoy different stories each time you play.

Griftland is sold at the My Nintendo Store for 2050 yen including tax. 'Spiritfarer' is a game in which you travel the sea as a mysterious captain who saves the souls who died while leaving their souls in their lives in a world between fantastic life and death. The game screen looks like a great handwritten animation, and The Verge describes it as 'a game of a Studio Ghibli movie.' Spiritfarer also incorporates agricultural and craft elements such as Stardew Valley and Animal Crossing, and is characterized by its bitter themes such as 'loss,' 'love,' and 'forgiveness.'

Spiritfarer is also playing on GIGAZINE, and you can check the reviews below. Spiritfarer is sold at the My Nintendo store for 2980 yen including tax.