Many people who are interested in guns that appear in movies and dramas should have wondered, 'By the way, what was the gun used by the main character in that scene of that work?' .. The Internet Movie Firearms Database (IMFDB) , a database of guns that appeared in fiction works,

is easy to use because it is made on the same MediaWiki as Wikipedia, and has appeared in various media such as Hollywood movies, dramas, animations, and video games. It is said that it covers all the guns that have been used, so I actually took a look. Then, a list of guns appearing in the movie was displayed along with the movie information. 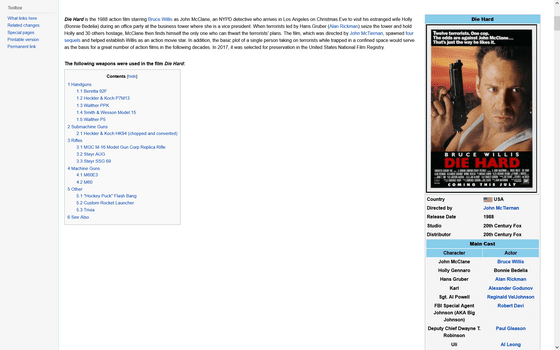 A description and specifications of the 'Beretta 92F' and a list of works in which this gun is used are displayed. In this way, IMFDB can look up 'what gun was used in which work' and vice versa. Next, try using the search function. If you enter 'Arnold' in the search field on the upper right, 'Arnold Schwarzenegger' will appear as a candidate, so select it and then click the 'Go' button on the right. 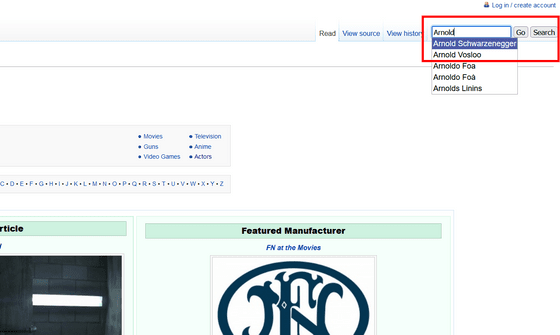 Then, the gun that Schwarzenegger used as a Hollywood star in many movies was listed along with the title of the work and the role. 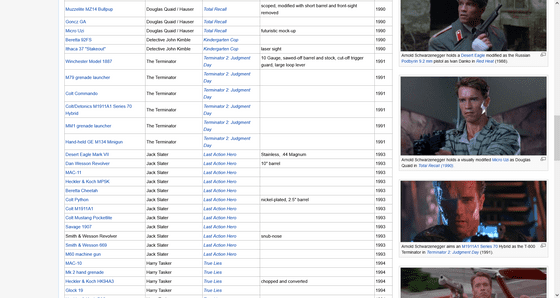 You can also search by category. For example, if you click 'Anime' on the upper left ... 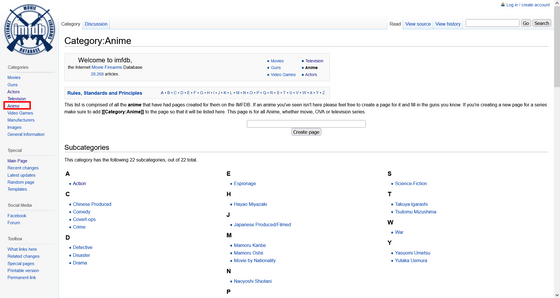 A total of 489 anime titles were displayed.

This time, I will select 'AKIRA ', which can be said to be the gold standard of Japanese animation. 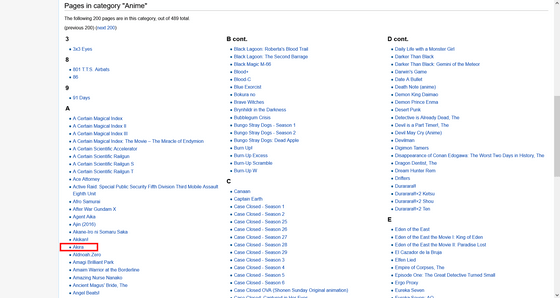 Then, the pistol used by Captain Shikishima, one of the main characters, was introduced. 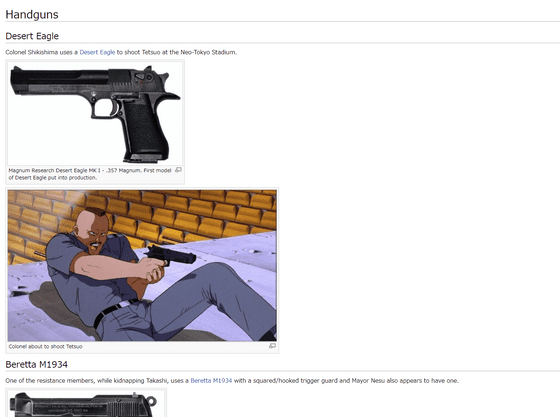 IMFDB basically does not handle unrealistic guns such as laser guns, but the laser cannon 'Arasaka HLR-12X' used by the main character Shotaro Kaneda in the final stage is exceptionally posted. In addition, 'Walther P38', which can be said to be the trademark of Lupine, the main character of In the video game, 'Colt M1911A1' that appeared in the first-person shooter game 'Call of Duty: WWII ' with the motif of World War II and was actually used for the US military service pistol ... It covers all kinds of guns, from real to fictitious, such as 'Ebony and Ivory', a two-chome pistol used by the main character Dante in the action game ' Not only the gun data is listed, but also the scenes that appeared are introduced, so you can enjoy remembering the famous scenes of the work that left an impression.