The latest trailer of 'Matrix Resurrections' in action scenes is released The latest trailer of 'The

Matrix Resurrections ', the fourth in the series following the trilogy of 'The Matrix ' released in 1999, 'The Matrix Reloaded ' and 'The Matrix Revolutions ' released in 2003, has been unveiled all over the world. it was done. With the release of the main story approaching Friday, December 17, 2021, the whole picture of the world of the new Matrix is becoming clear.


The trailer starts with the line 'We are in a strange loop without realizing it.'

Neo aka Thomas A. Anderson, played by

Carrie-Anne Moss in the town.

The trinity up to the previous work is a flashback.

'Billions of people spend their lives here,' whispers Agent Smith (act: Hugo Weaving ), who stood in front of Neo many times in the previous work.

The scene where Neo's mouth is blocked ...

Even this work will be revived like deja vu.

'It's time to know the truth.'

Neo where a gun can be pointed

Insert the plug in the back of the neck ...

Neo who wakes up.

'It's a wonderful brainwashing'

'I believe there is no choice but to live in that world.'

'But some of you'

'I know what the reality is'

'Even if released from the Matrix'

'War is the ruler of humans.'

'It's not him who decides his life.'

'She believed in me'

The helicopter in front of you explodes

'This time I believe'

'I've been waiting for you'

When Neo holds his hand ...

Suddenly the car blows away.

'If you want to save Trinity, fight!'

Demonstrate superhuman power that ignores the laws of physics ...

A big explosion will occur.

Someone who works on Neo plugs.

The last is from Neo's superhuman action scene ...

Hold your hand to blow away the enemy ...

It ends with a neo line that says 'I will never forget kung fu'.

DVDs and Blu-reys of 'The Matrix Resurrections' can be purchased on Amazon. 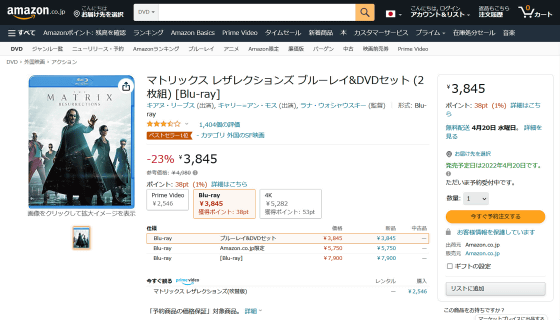