What is the 'very simple reason' that Mars has become a non-life-friendly star? 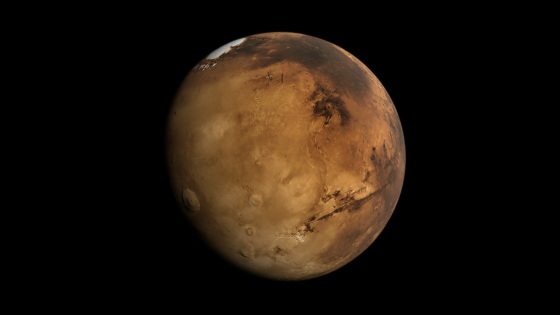 Mars is said to be a planet in the solar system that has an environment close to that of the Earth. In recent years, NASA's Mars probe ' Perseverance ' has landed and collected rock samples. An investigation is underway. It is believed that long ago Mars was covered with the 'water' needed to sustain life, but international research teams such as the United States and the Czech Republic said, 'Mars loses water for a very simple reason. Was decided. ' 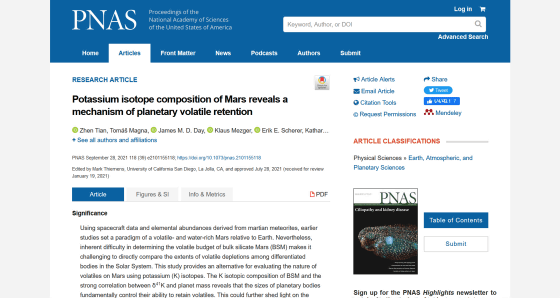 There Could Be an Extremely Simple Reason Why Mars Isn't as Suitable For Life
https://www.sciencealert.com/there-sa-simple-reason-mars-might-have-limited-habitability-its-tiny-size

Since multiple evidences of the existence of water on Mars have been found, it has been pointed out that some kind of microorganism may have existed, and it is also attracting attention as a migration destination for humankind. However, although it has been reported that ice exists on Mars, no liquid water has been found on the surface of Mars at the time of writing the article.

The presence or absence of water is an important condition for the existence of life and is a factor that has an important effect on the habitability of Mars. As for the reason why water disappeared from Mars, there is a theory that it was released into outer space due to a change in the magnetism of the planet, and that the southern hemisphere of Mars evaporates and flows out into outer space in the summer. It has been proposed.

As for the reason why Mars has run out of water, the research team hypothesized that 'maybe the water has volatilized due to the low gravity of Mars?' Mars is only 53% of the Earth's diameter and has about one-third the gravity of the Earth. If gravity is small, it is difficult to keep volatile substances on the planet, so it is possible that water has run out. To test the hypothesis, the research team investigated the evolution of volatile substances on Mars, using

The research team analyzed meteorites flying from Mars as a sample to investigate the potassium isotope ratio in old Mars. Kun Wang, a planetary scientist at the University of Washington, said that meteorites are the only sample available for studying the chemical structure of Mars, and the history of volatiles on Mars from 4 billion to hundreds of millions of years ago. It is pointed out that it is recording.

In this analysis, we investigated the composition of potassium isotopes contained in 20 meteorites and then compared them with the composition of the Earth, Moon, and asteroid Vesta. The results show that Mars lost more volatiles than Earth during the formation of the planet, but retains more volatiles compared to the smaller Moon and Vesta. This is a result that suggests a relationship between the gravity of the star and the amount of volatile matter it holds.

Katharina Lodders, a planetary scientist at the University of Washington, said, 'It has long been a question why the amounts of volatile elements and compounds on differentiated planets are much smaller than in primitive, undifferentiated meteorites. 'The correlation between potassium isotope composition and planetary gravity is a new discovery with important quantitative implications for when and how differentiated planets receive and lose volatiles.' increase. 'The fate of Mars was determined from the beginning,' Wang said. 'There is a limit to the size of a rocky planet needed to hold enough water to live in and enable plate tectonics, and the mass of Mars. Is believed to be beyond that. ' The research team points out that the results of this research may affect not only Mars but also life exploration on other planets. Until now, the focus of extraterrestrial planetary life exploration has been on planetary temperature, which depends on the distance to the star. However, based on the results of this research, 'planets that are too small are likely to be unable to retain the water needed for life,' further narrowing down the stars that are likely to have life.

'The size of an exoplanet is one of the easiest parameters to determine. Because size is the primary factor that holds volatiles, exoplanets are based on size and mass. You can know if you are a candidate for life. '