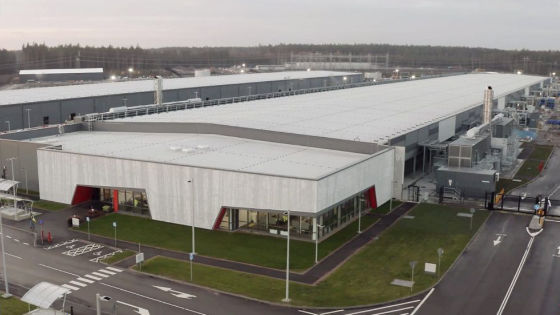 Microsoft, which is trying to solve energy problems through research and development such as 'underwater data center that cools servers with seawater ' and ' method of supplying power to data center with hydrogen fuel cell ', has given Sweden '100% green energy as a power source'. We announced on November 16, 2021 that we have opened a data center for decarbonization.

Today marks the launch of the new Microsoft sustainable datacenter region in Sweden, where the datacenters will run on 100% carbon-free energy, and further support our zero-waste certification commitment. Https://t.co/XLxESQOxM4

Microsoft has data centers all over the world, but in recent years it has been focusing on opening 'sustainable data centers', becoming carbon negative by 2030 and achieving net zero by 2050. Is the goal. Specific initiatives such as the '2024 95% reduction in the amount of water used in the data center by the year', 'research and development of immersion cooling toward the realization of the water without cooling' will be listed .

Supporting our customers on the path to net zero: The Microsoft cloud and decarbonization --The Official Microsoft Blog
https://blogs.microsoft.com/blog/2021/10/27/supporting-our-customers-on-the-path-to-net-zero-the-microsoft-cloud-and-decarbonization/ As part of these efforts, Microsoft has established '100% Green Energy Powered Data Center Areas' in three regions, Gävle, Sandviken and Stafanstoop, Sweden. The data center is said to be able to use 100% carbon-free energy 24 hours a day, 7 days a week in partnership with a major Swedish power company, Vattenfall. In the newly established data center area, 'Preem Evolution Diesel Plus' is used as a backup generator, and fossil fuel is used as part of the fuel, but more than 50% is renewable energy. Carbon dioxide emissions are reduced compared to standard fossil fuels.

In addition, Microsoft has contracts for renewable energy projects with energy companies such as bp , Enlight Renewable Energy and European Energy to reduce carbon emissions, achieve zero waste certification and 100% carbon free energy. We are working on operations.

In addition, in the data center opening area in Sweden, a 'circulation center' has been set up to sort and reuse servers and hardware on site. The circulation center is said to have the capacity to make 12,000 servers reusable per month. In addition, Microsoft has revealed that the servers in the new data center will be cooled only by the outside air all year round, and rainwater will be used for humidification.

Hélène Barnekow, general manager of Microsoft Sweden, said about the opening of the data center: 'The data center we opened in Sweden is one of the most sustainable and designed in the world.' This is a very important start for Sweden and Europe, as I belong to a company that believes that innovation in new technology is paramount to achieving its sustainability goals. By moving to the cloud , We are creating new opportunities to accelerate the transition to a sustainable future. '