Google Chrome 96 stable version has been released and the operation of 'back' and 'forward' has become faster-However, there is also a bug report that problems occur in the display of Twitter and Discord. 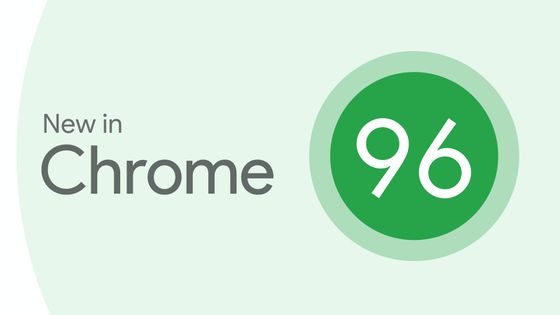 Version 96.0.4664.45, the latest stable version of the web browser ' Google Chrome', has been released. By saving the page you were looking at before in the cache, the 'back' and 'forward' operations have become faster, and the ID has been introduced into the PWA to explicitly show that it is the same app. , A new protocol has been introduced to make it easier to navigate to PWA apps. On the other hand, some people who have updated have reported

a bug that the display of Twitter and Discord has become strange.

If you use firefox instead of chrome, you can see the contents of the notification tab normally without any error. Claw has been updated today, so it's possible that something is wrong.

By the way, after updating Chrome, the notification display and video display on Twitter were buggy. 'Redo' does not work. pic.twitter.com/rPg8qOMgSr

Twitter notification
> There was a problem. please load again.
Maybe the trigger that you can't see in ... is due to the Chrome version upgrade?

Speaking of which, I manually updated Chrome on the first PC that had symptoms ...

Chromium's bug reporting thread reports that setting the 'chrome: // flags / # cross-origin-embedder-policy-credentialless' setting to 'Disabled' solved the problem. In addition, there are reports that although it could not be resolved with this setting, it was resolved over time.

◆ Back-Forward Cache enabled
By caching the pages you browsed, the display speed when moving pages with the 'Back' and 'Forward' buttons has been greatly improved. It is a function that has already been enabled in Firefox and Safari, and by implementing it in Chrome, it will be in line with major browsers. It is said that there are cases where the cache is invalidated under

◆ 'ID' can be entered in the PWA manifest
When you install a PWA app, you need to determine if it's an update to an already installed PWA app or if you're trying to install another app from the same site. Until now, the judgment was based on different parts such as 'start_url' and the path of the manifest file depending on the browser, so there were many items that should not be changed in the PWA manifest in order to continue to be judged as the same application. In the desktop version of Chrome 96, you can safely change other parts by setting the 'ID' item in the PWA manifest.

You can find the ID of the PWA you are already using in the 'Manifest' panel on the 'Applications' tab of the developer tools. The ID is immutable and should be chosen carefully when developing a new PWA. 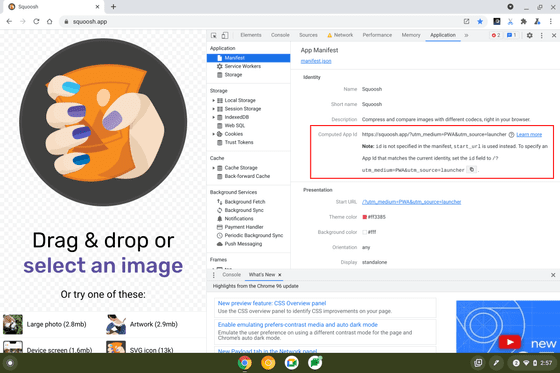 In addition, it is said that the ID item of the PWA manifest will be introduced in the mobile version of Chrome in 2022.

◆ URL protocol can be introduced
When installing a PWA app, the app is now free to introduce the URL protocol to some extent. If you use this mechanism, for example, if you set a protocol called 'web + tea', it will open in the original PWA if a URL scheme like 'web + tea: Darjeeling' is set on another site. I can. 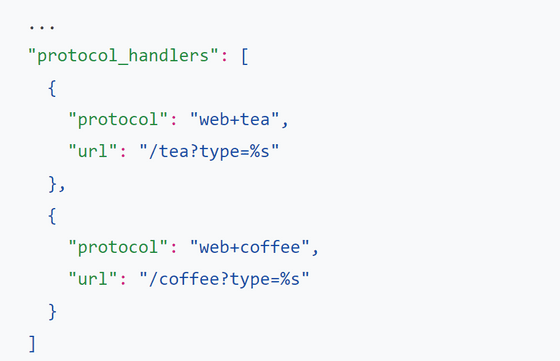 The protocol must be on the safe list or have a name that starts with 'web +'.

◆ UA string can be set to Chrome 100
In 2022, the major version of Chrome will hit the three-digit mark of 100, but if you are parsing the user agent string on the server, make sure that the three-digit version number does not cause any problems. Therefore, it is now possible to set the version number of the user agent to 100. It can be set in the '# force-major-version-to-100' item on the 'chrome: // flags' page.

◆ Other updates
-Experimental start of function to set resource priority
Experiments have begun on a function that allows the browser to be given priority by setting 'importance' when loading images and scripts. By increasing the priority of important parts, the apparent loading speed will be improved.

By registering for the origin trial of Chrome, you can check the operation on your site.

・ CSS Overview is now available
A function has been introduced in the developer tools that displays all the font and color information used on the page. You can open the CSS Overview from 'More tools' in the top right menu. 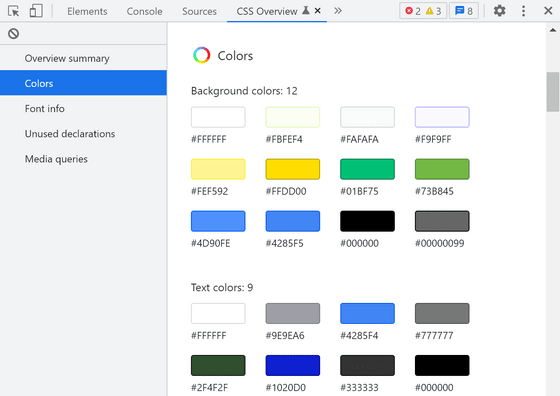