Manheim, a major American used car auction company, announced that the used car market in October 2021 reached a record high. According to Manheim, October 2021 was 'October, when the price of used cars rose for the first time in history.'

Manheim creates and regularly publishes the 'Manheim Index,' which is an index of used car prices that is not affected by vehicle type or vehicle usage by statistically analyzing more than 5 million used car transactions annually. doing.

And the graph of Manheim Index announced this time is as follows. The used car price index, which was set at 100 in January 1995, increased by 9.2% between September 2021 and one month, and as a result, in October it recorded '223.7', an increase of 38.1% from the same month of the previous year. .. 'October 2021 was the first October in the history of the Manheim Index, which began in 1997, when unseasonally priced prices rose,' Manheim reports. 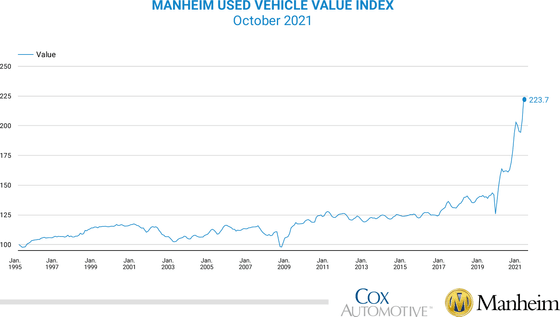 While used car prices are overheating, used car transactions are reported to be chilling. According to Cox Automotive, a market research firm for automobiles, total used car sales in October were down 10% year-on-year. In addition, new car sales were down 23% year-on-year, and new cars were sluggish.

'Every fall, new models of cars are announced and old models are discounted, but this year it wasn't,' said Jonathan Smoke, Chief Economist at Cox Automotive.

According to overseas news media 11Alive.com, the reason why used car prices are soaring is that consumers have plunged into the used car market as a result of a decline in new car production due to a global shortage of semiconductors. matter.

The supply chain turmoil triggered by the pandemic of the new coronavirus has caused a shortage of semiconductors since 2020, and the automobile industry in particular has been

hit hard . As a result, major automakers such as Toyota and General Motors have been forced to cut production and temporarily close their factories. Marty Parker, a supply chain expert and lecturer in business administration at the University of Georgia, said, ' It's also related to inflation for the first time in 13 years and increased demand due to many people having to commute for the first time in a long time. The combination of these factors has resulted in the worst of the situation. At the same time, it may be a great opportunity for those who have cars that they do not plan to use, 'he said. He also said that the cause was an increase in demand for automobiles due to the resumption of the economy.