Elon Musk tweeted, 'If the United Nations can explain how to solve the hunger problem, I will sell Tesla shares and donate 680 billion yen now.' 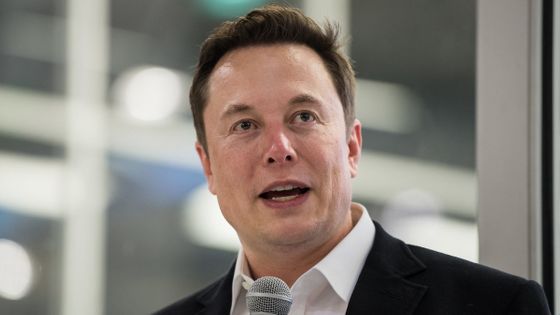 In October 2021, the United Nations World Food Program (WFP) Secretary-General David Beasley said in a program broadcast on CNN, 'The ultra-rich people donate some of their assets to solve the world's hunger problem. It will help, 'said Tesla CEO Elon Musk and Amazon founder Jeff Bezos. 'If we can explain exactly how WFP will solve the world's hunger for $ 6 billion, we'll sell Tesla shares and donate,' Musk said. It is stated on Twitter.

Elon Musk says he will sell Tesla shares to help world hunger – if the UN can prove where the money is going --CBS News
https://www.cbsnews.com/news/elon-musk-tesla-shares-world-hunger-united-nations/

WFP's Beasley said in a CNN show aired October 26 that donating a small portion of the wealth of a handful of ultra-rich people would help solve the world's hunger problem. .. Bezos named Musk and Bezos, the world's # 1 and No. 2 wealthy people, '$ 6 billion to save 42 million people who would literally die if we didn't reach out.' It's 100 million yen). It's not a complicated problem. '

Even during the pandemic of the new coronavirus infection (COVID-19), the wealth of ultra-rich people is steadily increasing, and in November 2020, Mr. Musk's total assets surpassed Microsoft founder Bill Gates to the world. I came in second. According to the Forbes 400, the world's billionaire ranking released by the economic magazine Forbes in October 2021, Mr. Musk's total assets are 190.5 billion dollars (about 21.7 trillion yen).

Mr. Beasley's remarks have been widely covered around the world. Meanwhile, AI researcher and businessman Eli David said, 'WFP raised $ 8.4 billion in 2020. Why didn't you'solve the world's hunger'?' In a tweet, Musk commented, 'If WFP can explain exactly how $ 6 billion will solve the world's hunger in this Twitter thread, we will sell and donate Tesla shares now.' bottom.

If WFP can describe on this Twitter thread exactly how $ 6B will solve world hunger, I will sell Tesla stock right now and do it.

Just five hours after Musk's remark, Beasley also replied on Twitter. Mr. Beasley first points out that there is a misunderstanding in the premise that '$ 6 billion will solve the world's hunger', but if there is $ 6 billion, geopolitical instability and mass migration It claims to be able to save 42 million lives in the face of hunger in unprecedented situations such as COVID-19, conflict and climate crisis.

@elonmusk ! Headline not accurate. $ 6B will not solve world hunger, but it WILL prevent geopolitical instability, mass migration and save 42 million people on the brink of starvation. An unprecedented crisis and a perfect storm due to Covid / conflict / climate crises.

In response to David's question, 'What did WFP do with the $ 8.4 billion raised in 2020?' Beasley said, 'The $ 8.4 billion you are referring to is 115 million in 2020. We have covered funding to provide food aid to everyone. We have $ 6 billion in additional funding in addition to existing funding requirements due to the combined impact of COVID-19, conflict and climate crisis. I need it right now. '

The $ 8.4B you refer to covers what we needed to reach 115 million people in 2020 with food assistance. We need $ 6B plus NOW on top of our existing funding requirements due to the perfect storm from the compounding impact of Covid, conflict and climate shocks ..

I can assure you that we have the systems in place for transparency and open source accounting. Your team can review and work with us to be totally confident of such.

'With your help, we can bring hope, build stability and change the future. Let's talk. It's not as complicated as Falcon Heavy, but Beasley told Musk. There's a problem I can't help but talk about. I can ride on your next flight. If you don't like my story, you can throw it away! ' I proposed to set up a place to discuss activities and donations.

. @elonmusk With your help we can bring hope, build stability and change the future.

Let's talk: It isn't as complicated as Falcon Heavy, but too much at stake to not at least have a conversation. I can be on the next flight to you. Throw me out if you don't like what you hear!

In response to this offer, Mr. Musk replied, 'Please disclose your current and planned spending in detail so that people can see exactly where your money is going. The light of the sun is wonderful.'

Please publish your current & proposed spending in detail so people can see exactly where money goes.

Sunlight is a wonderful thing.

'I'll show you (about WFP accounting) instead of tweets. We can meet anywhere on Earth or in space, but I think you have WFP members, processes, and technology in action. I suggest meeting you where you are. '

@elonmusk Instead of tweets, allow me to show you. We can meet anywhere—Earth or space—but I suggest in the field where you can see @WFP's people, processes and yes, technology, at work. I will bring the plan, and open books.

Mr. Musk asked Mr. Beasley to comment on the article 'The United Nations peacekeeping forces were sexually abusing children in Central Africa,' but Mr. Beasley replied at the time of writing the article. Is not ...

CNBC said that if Mr. Musk sold $ 6 billion worth of Tesla shares to make a donation, it would be the largest known donation activity Mr. Musk has ever made. .. Musk said he prefers to donate anonymously, but announced in 2021 that he would donate $ 100 million to a global contest to develop carbon dioxide reduction technologies. Did.