Why did Hacker X, the operator of the fake news network with Donald Trump as president, reveal his identity now? Robert Willis, a member of the white hacking group Sakura Samurai , said, 'When Donald Trump ran for president, he was carrying out a large-scale fake news campaign that would discourage opponents.' Confessed to Ars Technica, an IT news site.

Mr. Willis was looking for a job in 2015, and he went on to the final interview at two companies, and he received a job offer from one of them. Willis was wondering whether to decline another company, but was interested in the opacity of not revealing his job description or the name of the company and decided to have a final interview.

'The final interview was in a large, empty corporate building. I was instructed to wait in the lobby until they were gathered, but I'm an adventurous lover and I was so excited to wander around.' Willis.

The interview venue was an empty office, and when everyone sat in a chair, the interviewer revealed the company's name for the first time there. 'I wasn't scared, but I was excited to think about how crazy this was,' the interviewer told me, 'Everything in the company has a very high level of security in mind. It's made. ' The job revealed on the spot was to spread one of the popular websites that the company already owns online. In addition, the interviewer said, 'We are against big companies and big government because they are essentially the same.' 'Our business is about freedom,' politically-minded. He started talking about strong content and finally stated clearly, 'If you work for our company, you can stop Hillary Clinton.'

Willis said, 'I hate established parties, Republicans, and Democrats, and Clinton is like the established party itself, and I was almost certain to run for the 2016 presidential match, so I was targeted. I was forced to move because the Democratic Party literally destroyed the state I lived in. At that time, when asked if I would choose the Democratic Party or the Republican Party, I definitely chose the Republican Party. I thought it was a good retaliation at the time. ' At that time, the company was making a lot of money. The website in question focused primarily on health topics, with information on supplements and alternative therapies. Advertising revenue is 30,000 dollars (about 3.3 million yen) a month, and if you include the sales of the mailing list, the revenue has increased further.

In addition, direct mail sent to registered users twice a week will include promotions for ready-made products and new products, affiliate links, and one virtual event will generate hundreds of thousands of dollars (tens of millions of yen). It seems that it was obtained.

'Targeting and enrolling individuals has made a huge profit. The company advertised products directly to individuals and sold thousands of products at once,' Willis said. I testify.

On the website that Willis operated, once a day, the site owner contributed an article during the time when it reached the millions of readers most, including the Chemtrail Conspiracy Theory and 'Lemon. The content was something that would normally be ridiculous, such as 'Cancer is cured.' Mr. Willis also thinks that he will believe only 'a few ultra-crazy people' and talks with his colleagues 'I don't think he believes in such an article' 'No, I swear to God'. He was laughing. Since the end of 2015, there have been more and more articles about parent Trump on the website. And since Mr. Trump won the 2016 Republican primary, the number of anti-Clinton articles has increased further. From this time on, websites often expressed some opinions in articles.

In addition, the quoted information is placed in a form that misleads the content of the link destination, and the number of articles showing articles on the own site is increasing. In addition, it was difficult to confirm the facts of the source, and the allegation was that 'Mr. Clinton made the owner of the gun a criminal, deprived the press of freedom, forced the conservatives to be drugged, and the will of the people. On the contrary, they are planning to vaccinate, euthanize some adults, and abolish the American Stars and Stripes. ' But according to Willis, Facebook banned links to this website only during the two years Willis was involved, even though the content of the website he was running was messed up. It seems that it was only once.

In addition, Mr. Willis created hundreds of news sites and gained access by sharing the links of the operating website in the network composed of them. Each news site was placed on a separate server, had a unique IP address, and each seemed to be independent. In addition, articles posted on the website were delivered to each news site by synchronization work using

multiple VPNs and security layers. According to an actual investigation by Ars Technica, it was confirmed that hundreds of fake news site domains appeared in 2015 when Mr. Willis was involved in the operation of the website.

In addition, the team led by Willis got a lot of SIM cards by cash payment and connected to various cities using VPN to create a lot of Facebook accounts in order to mass-produce Facebook pages and Facebook groups. 'We need a real person to create a Facebook page, so we followed this procedure for everything that comes with our website. We try not to leave any attachments or traces of the original source anyway. If anyone investigates the owner of the page, it's investigating a fake person. ' Below is a list of Facebook groups run by Willis. 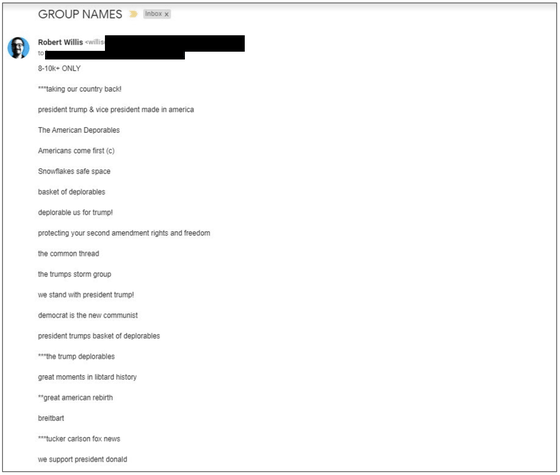 After that, carriers began to ask for a social security number for issuing and activating SIM cards, but according to Willis, even if he gave the number of the dead person or something like that, he passed. There was no problem. When Mr. Willis used the social security number of Elvis Presley that he happened to see on the internet one day, he passed the examination without any problems.

As a result of Mr. Willis's 'effort', articles on the website have reached as many as 30 million people a week. Willis said, 'It was like playing a video game and getting a new high score. I thought of the reader as a background character in the video game, not as a person. I liked it, so I was able to work without having an emotional attachment to the materials and people. '

And Willis and his subordinates were shocked that Mr. Trump really won the presidential election in 2016. Since then, many experts around the world have published a treatise concluding that 'Mr. Trump's victory came from a fake news site.' Perhaps because of Mr. Willis's careful work, some of the series of treatises pointed out the website he runs, but he said that there was nothing that could be linked to the identities of Mr. Willis and his subordinates. Willis also hoped that he and his team would be arrested and everything would come to light, but that didn't happen.

You will be hearing about me after the release of a book regarding the 2016 election. 1/3

'Willis is an idealist. He escaped,' he said, explaining why he didn't reveal his name in Peyton's book and did so for the first time in this Ars Technica interview. He regrets what he did, but I wanted to protect him. I didn't say he wanted to protect him. ' He states that he prioritized his personal safety and made him anonymized.

Willis explained why he revealed his identity on his blog : 'A new battle has begun to awaken the manipulated people while actively eliminating fake news. The pandemic of the new coronavirus , Fake news and the deadly side of anti-vaccine showed me. After many conversations with my father who refused to wear a mask or vaccination, I became very worried. When I asked what kind of site I was reading the conspiracy theory, I mentioned the sites that belonged to the network I created. '

In addition, Mr. Willis confided everything he had done to his family and appealed to his father to wake up, but he did not listen to Mr. Willis's voice at all.