The energy drink 'Monster Rossi', which bears the name of 'the strongest rider in history', is characterized by its refreshing citrus acidity and refreshing sweetness. From the energy drink Monster Energy, ' Monster Rossi ' appeared on October 12, 2021 (Tuesday). Monster Rossi, which has won a total of nine world championships and

has a can in collaboration with bike racer Valentino Rossi who announced his retirement in August 2021, is a flavor that appeared only in the summer of 2017, but again I heard that it became regular in response to the voice that I wanted to release, so I actually drank it.

The monster Rossi can has a design like this. 'THE DOCTOR' written under the logo is Rossi's nickname. In addition, Valentino Rossi's initials 'VR' and Rossi's bib number 46 were written on the top of the can. In addition, under the description written on the side of the can, there was a Rossi sign. The raw material looks like this. The sweetness is derived from sugar, glucose and sweetener (sucralose), and the juice syrup contains orange juice and lemon juice. The content is 355 ml. 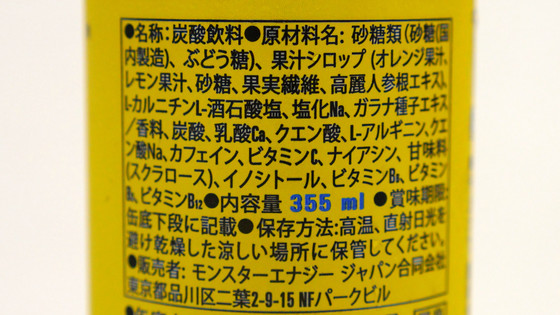 I was curious about the contents, so I poured it into a glass. The color is quite bright yellow. It's a little difficult to understand in the image, but it looks a little muddy when it is transparent to light, probably because it is mixed with fruit juice. When you drink it, you can feel the acidity and aroma of orange. The carbonic acid is a little weak, and the taste is like orange juice with a strong acidity. Since sugar is used, it has a refreshing sweetness, and you can not feel the unique flavor of energy drinks, so it was finished as an easy-to-drink drink. 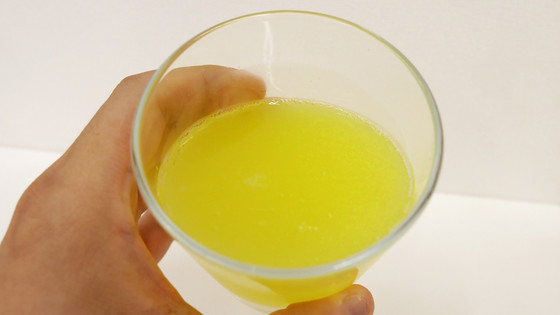 Monster Rossi will be available for purchase at supermarkets and convenience stores nationwide from October 12, 2021, and the price is 190 yen excluding tax. It is also available on Amazon.co.jp, and you can purchase a 24-piece set for 4278 yen including tax.