The MMORPG 'New World ' developed by Amazon Games was officially released on September 28, 2021. This game is gaining popularity as the number of simultaneous player connections exceeds 500,000 within 28 days, but the names such as 'Bezos' and 'Amazon' of Amazon founder Jeff Bezos are used for the player name. There are reports that it cannot be done.

New World is an RPG that opens up your destiny with weapons and magic as an adventurer wrecked on the supernatural island 'Aeternum'. As an orthodox open world MMO where you can enjoy both PvE and PvP with elements such as harvesting and hunting, the number of downloads is increasing all over the world.

In New World, players can register their favorite name as 'player name'. However, since the player names of such games are visible to others online, it is common to not be able to use dirty or inappropriate words. New World also seems to restrict the use of certain words, but it has been reported that somehow 'Amazon' and 'Bezos' are also included.

Use is restricted for 'Amazon', 'Jeff B', 'Bez 0s', 'Be Zos', 'Jeff Be zoos', etc. If you try to register with these names, you will get the same warning that you cannot use this name, just as if you entered inappropriate words. 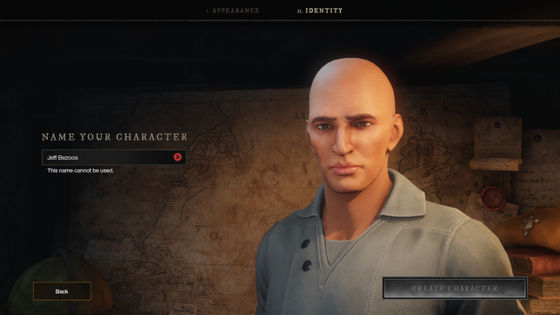 PC Gamer's Morgan Park, a gaming media, said, 'I think it prevented a lot of players from giving Bezos a silly name. There must be other banned names, so investigate. I will continue. '

However, after that, a user reported that he 'found him' on the overseas bulletin board Reddit. I posted a screenshot of a player named 'Jeffrie Bezos'.


After confirming this report, Mr. Park conducted another investigation and found that 'eBezos' and 'ieBezos' were banned, but 'rieBezos' was not banned. 'Use this information to do what you want,' Park said.