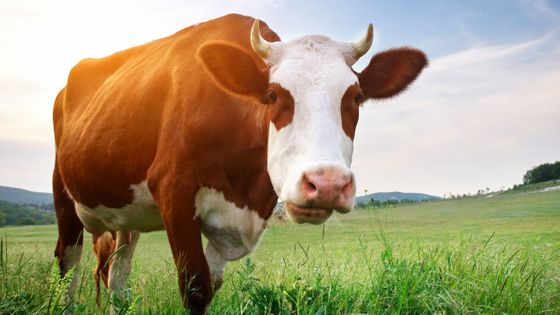 Since the livestock industry emits a large amount of greenhouse gases, there are voices saying

that 'to stop global warming, you should avoid eating meat and dairy products ,' and 'letting cows eat seaweed and belching.' There is also research such as 'reducing.' New research teams in Germany and New Zealand have announced the results of their research that they have succeeded in potty training for cattle, and it is hoped that they may help prevent global warming and environmental pollution. 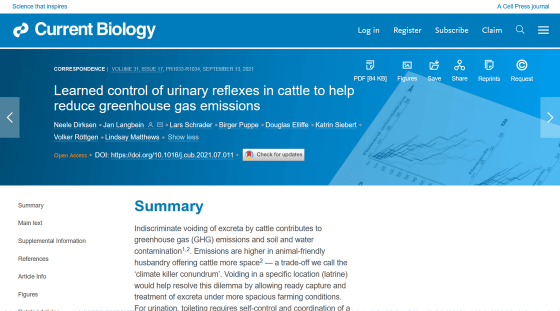 We managed to toilet train cows (and they learned faster than a toddler). It could help combat climate change
https://theconversation.com/we-managed-to-toilet-train-cows-and-they-learned-faster-than-a-toddler-it-could-help-combat-climate-change-167785

Cows excrete dozens of liters of urine a day, and the large amount of nitrogen contained in this urine causes various environmental problems. For example, when a grazing cow urinates, it breaks down in the soil to produce nitrates and nitrous oxide . Nitrate leaches into lakes and rivers, causing excessive growth of algae and adverse effects on fish, and nitrous oxide is a greenhouse gas that is 300 times stronger than carbon dioxide, accelerating global warming. In addition, when cows raised indoors urinate, nitrogen mixes with feces on the floor of the barn, producing another pollutant, ammonia. 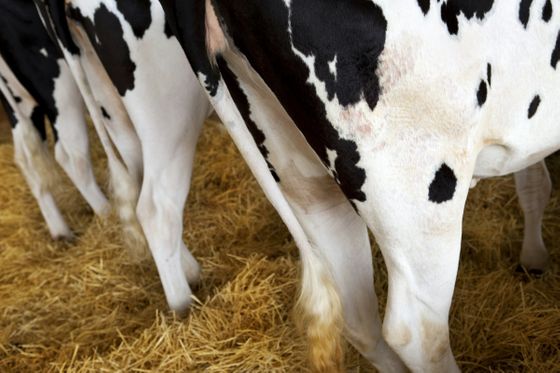 However, if the urine excreted by cattle can be processed together, it will be possible to prevent nitrogen from turning into harmful substances. Therefore, research teams in Germany and New Zealand conducted an experiment to train cows in toilet training, thinking, 'Isn't it possible to deal with various environmental problems by giving cows'toilet training'?'

First, the research team puts the target calf in a cage

As a result of the experiment, the research team stated that 11 out of 16 animals were successfully potty-trained and were able to urinate in their cages. In addition, when limiting after optimizing the toilet training method, it was said that 7 out of 8 were successful. The potty training period was 15 days, and many calves learned to urinate in cages after 20 to 25 urinations, with calves urinating in the toilet as fast as or faster than human infants. The research team claims that they can learn the place.

You can see how the potty-trained cow urinates in place in the movie below. One cow came in. The cow started urinating with his butt firmly in the cage. After urinating, molasses etc. is poured into the feeder in the cage ... Cows can get rewards. In this experiment, not only can cows be potty trained, but also 'the cows can understand that they are about to urinate' and 'the cows can endure urination until they walk down the aisle and enter the cage'. It became clear. Brian Hare, an animal cognition scientist at Duke University who wasn't involved in the experiment, said, 'It's not surprising that we can train calves to urinate in place, but no one has ever demonstrated it. It's surprising that we didn't, 'he said, pointing out that the key question is whether this outcome can be scaled up.

According to the research team, automating urine detection and rewards in potty cages and reducing human intervention in potty training is only a technical problem. On the other hand, in order to decide the appropriate place and number of cages for toilets, it is necessary to understand how much cows can endure urination, which is a future issue. Especially when grazing cattle outdoors, where to place the cage becomes a big issue.

'We know that nitrogen from cattle urine contributes to both water pollution and climate change, and these effects can be reduced by potty training in cattle. The more urine we can collect, the less we need to reduce the number of cows to reach our emissions goals and compromise on the availability of milk, butter, cheese and meat. ' ..